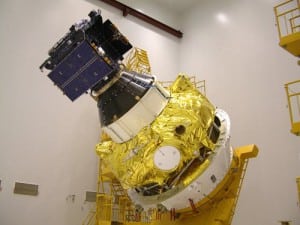 SSTL designed, built and tested GIOVE A in 30 months for the European Space Agency (ESA) and was launched on Dec. 28, 2005 with a mission to secure vital frequency filings, generate the first Galileo navigation signals in space, characterize a prototype rubidium atomic clock, and model the radiation environment of MEO for future Galileo spacecraft. In 2008 ESA declared GIOVE A a full mission success and the following year the pathfinder satellite was retired from its original extended mission and maneuvered into a higher “graveyard” orbit.  SSTL then took over spacecraft operations from ESA and, at its new altitude of 23,300km, GIOVE A has continued to provide data about the radiation environment in Medium Earth Orbit (MEO), and an on-board experimental GPS receiver is used to map out the antenna patterns of GPS satellites for use in planning navigation systems for future high altitude missions in Geostationary Earth Orbit (GEO), and beyond into deep space.