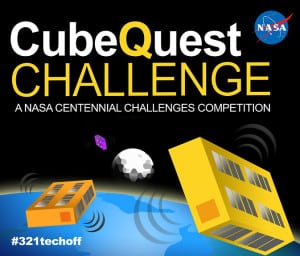 [Via Satellite 11-25-2014] NASA has opened the registration process for its Cube Quest challenge, a CubeSat competition focused on developing space exploration technology. Competitors will vie for a piece of the $5 million prize along with a chance at launching their CubeSat to the Moon and beyond as a secondary payload on the first integrated flight of NASA’s Orion spacecraft and Space Launch System (SLS) rocket.

Teams will compete by designing, building and delivering flight-qualified, small satellites for operations near and beyond the moon. NASA has allocated $500,000 for a series of ground tournaments to determine who will fly on the first SLS flight. A larger prize purse of $1.5 million is for demonstrating communication and CubeSat durability at a distance greater than almost 2.5 million miles — 10 times the distance from the Earth to the Moon. The remaining $3 million is for a “Deep Space Derby” where competitors will have to prove they can place a CubeSat in a stable lunar orbit while demonstrating communication and spacecraft durability near the Moon.