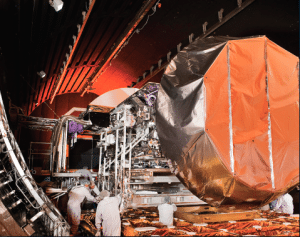 [Via Satellite 04-17-2014] Engineering giant Lockheed Martin is making progress on its plans to reengage the commercial satellite market. At the core of this plan is the complete renovation of the company’s flagship A2100 satellite bus. Lockheed Martin is reviewing every detail of the A2100 to modernize both the technology and the manufacturing process to make it competitive again in the commercial market.

“Over the past decade, with much of the focus on government programs, less emphasis was put on our commercial satellite business,” said Mike Hamel, president of commercial ventures at Lockheed Martin Space Systems. “But not unlike many other companies, as the government markets have flattened, and with the uncertainty in federal budgets, we have increased our emphasis on the commercial space business, both the commercial communication satellites as well as the remote sensing programs.”

Lockheed Martin first manufactured the A2100 bus more than 20 years ago. Hamel described the bus as a “real workhorse” during the 1990s and into the 2000s, but since then it has lost its edge. The technology became dated and the platform’s business proposition weakened. Aiming to reverse this trend, Lockheed Martin initiated a series of goals to revitalize the satellite bus.

“We’re targeting to achieve about a 35 percent cost reduction in our overall spacecraft development production cost and about 25 percent faster time to market, which we think will be right on the leading edge of what is being done today in the commercial and geostationary communications satellite business,” said Hamel.

To date, the company’s efforts have already begun to prove themselves remunerative. Australia’s first commercial Ka-band satellite, Jabiru 1, is built on the A2100 platform. The geostationary satellite recently passed its Critical Design Review (CDR), making way for its expected launch in 2015 aboard an Ariane 5. Australia-based NewSat will operate Jabiru 1, and anticipates launching four more satellites between now and 2017.

Sterne Agee Senior Research Analyst Peter Arment is confident that Lockheed Martin’s move back into the commercial realm should not be underestimated.

“They were on the outside looking in for the last few years,” he said, “but I think it’s no question given the engineering resources and technical capabilities at Lockheed Martin; if they want to work their way back in, they certainly have the capability to do so.”

The other part of the company’s plan involves re-centering its space systems manufacturing at its Denver, Colo. building. This involves closing the company’s Newton, Pa. facility in 2015. According to Hamel, the move will consolidate “people, process, capability and knowhow,” to make the company more effective. Some of the commercial satellite assembly and testing assets at Lockheed Martin’s Sunnyvale, Calif. facility will also be moved to Colorado.

“We felt a need to try to reduce structural costs in the company and over time we had multiple facilities across which different subsystems, components, final assembly and tests were done for commercial communications satellites as well as our government satellites,” said Hamel. “We will be doing a consolidation in the space systems company … [and] by the middle of 2015, all of our commercial communication satellites, design, engineering, marketing, assembly and testing will all be centered here in Denver, Colo. We think that that will have great benefit in terms of increasing the synergy within the company as well as providing much better focus for our customers.”

Like other United States companies that have been adversely affected by federal spending drawdowns, Lockheed Martin is also expanding its presence internationally. Roughly a year ago the company created a separate business entity called Lockheed Martin International to help build stronger relationships around the globe.

“It shouldn’t be terribly surprising that the locations of some of these Lockheed Martin International companies are in Australia, Korea, Japan, UAE, Canada, Saudi Arabia and the United Kingdom … many of the commercial operators’ headquarters are in those countries,” said Hamel. “For example, Inmarsat has its headquarters in London, and likewise we see a number of important operators in the Middle East in the UAE and Saudi Arabia. Japan is a very close and historic customer for us as well. We are going to be leveraging those investments and those relationships across Lockheed Martin with a particular focus on expanding our cooperation as well as sales in the commercial space business.”

Hamel added that customer input is now a driving influence on Lockheed Martin’s satellite designs. For example, the A2100 is now capable of supporting electric propulsion after discussions with customers who expressed interest. Another new feature is satellite re-programmability in order to allow operators to reconfigure satellites through software updates. Furthermore, the company is looking into new ways to up the amount of capacity a satellite can provide.

“A lot of the core design is very similar to what you see in the electronics world,” explained Arment. “Platforms don’t necessarily change dramatically but the electronics inside are refreshed constantly. We certainly see that across the board in military platforms, and they are looking to ramp the capabilities of the A2100, but at the same time provide what is a proven system at dramatically lower cost — and likely risk — to the customer.”

Lockheed Martin’s extensive history of government projects allows the company to pool strengths from defense and civil space programs as well. Lockheed Martin is applying lessons from other fields to make its commercial business more competitive. Federal budgets are expected to remain constricted in the near future, which further inclines the company to seek out long-term potential in the commercial market.

“There’s no single event where we’ll unveil the new A2100, like they do at auto shows,” said Hamel. “Rather, we’ll incorporate the refresh incrementally into our offerings as we continue through engineering, development, and the full-qualification of flight units … we think it’s a very exciting time, and we’re very much committed to reestablishing our position in the commercial marketplace by both providing our customers great capabilities, and also leveraging the developments of our government customers.”