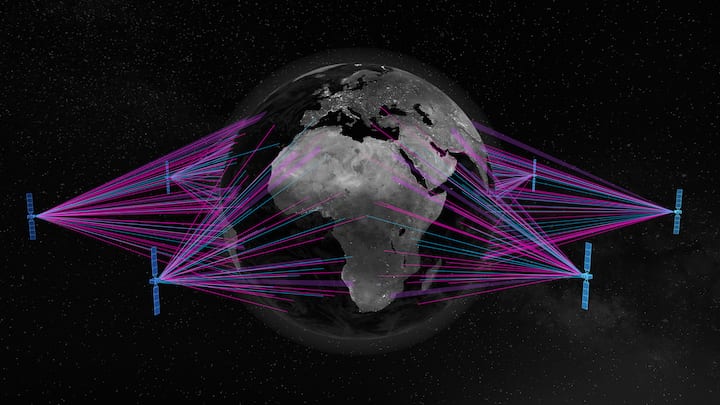 ST Engineering iDirect and Gilat have been selected as SES technology partners for the development of its O3b mPOWER system. SES announced Tuesday that the companies will developing the core infrastructure modem platforms for O3b mPOWER, and they were selected for their next-generation modem technologies.

Stewart Sanders, SES executive vice president of Technology, and o3B mPOWER program lead told Via Satellite that the RFP for these partners started just over a year ago, and SES was looking for something a little different this time when selecting partners. The company was very specific that it only wanted two partners, rather than a range of partners. In order to optimize the delivery of the O3b mPOWER system SES wanted to work with best-in-class vendors who share its vision and goal of an open, virtualized, and orchestrated system.

“During the Request for Proposal (RFP) process, we had stated we wanted to work with partners — we don’t see it as a transactional relationship where we put money on table and they deliver hardware. We see it as a joint modem platform development. In that context, choosing only two platforms in ST Engineering iDirect and Gilat allows us to focus the core delivery and to avoid unnecessary outgrowth of supported platforms in the future,” Sanders said.

Sanders talked about how things have changed, that it wanted to have partners much more involved in the overall platform development, and how the partnership model is now a vital part of what SES does. He said, “Unlike any other program that I have worked on, much of the development work in O3b mPOWER is actually in the software. While you might think of modem platforms as traditionally hardware, the vast majority of the ground development work is software. ST Engineering iDirect and Gilat were chosen for their mix of capabilities; they have forward-looking technical roadmaps in terms of where they can go in the future, a path to virtualization is of interest to all parties and they can work with other companies and standards such as Kythera, Microsoft, Open Network Automation Platform (ONAP) that we are bringing to the table.”

Risk and Reward for Vendors

Things have changed significantly for SES in how it selects and works with technology partners in the development of its communications system. Sanders said in the Geostationary Orbit (GEO) world, SES had some leverage with vendors that it did not have with Medium-Earth Orbit (MEO) and Non-Geostationary Orbit (NGSO) development, as O3b was a very small new entrant, and a lot of work needed was bespoke development. But Sanders said there was a notable change in the relationship with vendors of O3b mPOWER versus its experience from the current O3b constellation. With O3b mPOWER, the vendors are much more receptive to a partnership dialogue and engagement.

“With O3b and it being a new technology of relatively lower volume, we were not in a particularly strong position to engage with vendors,” Sanders said. “With O3b mPOWER the concepts of risk and reward are better understood and welcomed by the vendor partners. First, they can see by putting in money in terms of the development, and not just expecting us to pay for it, there would be a bigger payoff in the long run as the system scales up. Second, when you look at the volume we are talking about, they see the benefits of the volume and working together. We need to make sure we see a technical roadmap together.”

Sanders said SES didn’t have any one single thing that it was looking from these platform vendors compared to other programs, but he believes it is a combination of a focus on next generation waveforms, DBS-X2 (though O3b mPOWER is waveform agnostic), scalability, flexibility, price point, adaptability, and suitability to multiple markets, so not just targeted at one particular market. He also says that SES is not done yet.

“We are still talking about other things such as a Platform-as-a-Service [PaaS] concept or virtualization. We are keeping an eye on the long-term development so we don’t get tied into vendor lock, which is something we have actively avoided both through the way we are engaging with vendors but also the adoption of open standards,” he said. “The satellites themselves are sophisticated bent pipes, and we can work with pretty much any platform but we feel we have the best opportunity with the two we have chosen; first with Gilat last year and ST Engineering iDirect this year.”

For ST Engineering iDirect, this deal is a validation of its technology. Thomas Van den Driessche, president and CCO of ST Engineering iDirect hailed the forward-looking nature of the deal. He told Via Satellite, “It is a strategic partnership and very significant for both companies. We will be delivering the components and solutions that form part of our next-gen capabilities and SES will be one of the first customers to experience them. O3b mPOWER’s capabilities are certainly a differentiator and we look forward to enabling them. This constellation promises to transform how traditional satellite services are delivered and it is a catalyst for our strategy going forward to provide our customers with a dynamic platform that meets unique requirements across any orbital plane.”

Van den Driessche said this deal was more important than just revenue, and technology innovation reflects the DNA that can be found at the heart of both companies. “The innovation on the constellation is evident in the way in which individual terminals can be addressed and how the digital payload can address the flexibility and agility in the footprint. The innovation here will be indicative of the whole future of the satellite industry,” he added.

With satellite operators such as SES looking to more of a software-based approach, it will be up to technology companies such as ST Engineering iDirect to cater to these new, challenging demands.

“There are a lot of elements such as unprecedented scalability and virtualization of some of the hub components. There are new levels of flexibility with dynamic allocation of resources leveraging SES’s Adaptive Resource Controlling so that services can adjust to customers wherever they are and whatever their growth plans. A lot of these innovations are cloud-driven to enable new capabilities for end customers. Some of them we don’t have to invent them, but we have to integrate them in order to comply with terrestrial evolutions that are happening today,” Van den Driessche said.

For SES, the next two years will be highly significant in the development of its mPOWER communications system. The system is fully funded and SES will launch a series of satellites next year. For ST Engineering iDirect, working with a company with a fully-funded business plan is key as it looks to dedicate its technology resources.

“The industry, and the ecosystem that is built around it, is reliant upon strong partnerships. We have great confidence in our partnership with SES. There are a lot of programs that may or may not materialize in 2021 but in terms of O3b mPOWER, we are executing on something that we believe will definitely happen. We are proud to be a partner and to take further steps towards achieving our vision of a GSO and NGSO, multi-access platform to deliver next-generation services and applications enabled by emerging 5G standards,” Van den Driessche said.

Sanders believes the system will enable SES to target new markets with its services. The system is more than just traditional markets such as maritime and aero for example. He talks of how O3b mPOWER leverages its existing MEO high-throughput, low latency with flexible forward to return ratio, which means it can serve many different markets according to their needs. “For example, we think we will have a differentiated, even unique offering to the Intelligence, Surveillance and Reconnaissance (ISR) business which needs a return dominant link, something not generally provided by other high throughput satellites — this is of course a hugely interesting market from an applications’ perspective,” he said. “We can extend services we are providing to the cruise business and maritime in general, delivering a lot more of the same, more throughput with dedicated end points.”

SES’s current O3b MEO system requires that each group of five user beams route data back to the same gateway beam. The order of magnitude of O3b mPOWER allows each user endpoint to have multiple simultaneous connection according to the user’s needs, and to change the connections dynamically as needed. “For example, the user can connect to one of SES’s large gateways and/or an in-country gateway (perhaps owned a customer) as well as connect data to any other end point within visibility of the satellite, all at the same time. This unprecedented flexibility that O3b mPOWER provides is what will allow us to close many new business cases,” said Sanders.