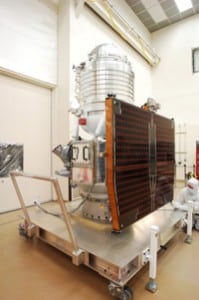 [Via Satellite 08-22-13] Ball Aerospace & Technologies’ Wide-field Infrared Survey Explorer (WISE) spacecraft will emerge from its two-year hibernation in September to resume its near-Earth object NEOWISE asteroid hunting mission. The renewed mission will again focus on detecting near-Earth objects that may be of importance for identification and detection of asteroids for future NASA missions.

“The multiple repurposing of WISE is proving to be much like Ball’s Deep Impact spacecraft,” said Jim Oschmann, vice president and general manager for Ball’s civil space and technology business unit. “You expect a satellite to complete its initial mission, and then when it remains healthy it makes sense to further utilize the spacecraft for additional research and discovery.”

Ball Aerospace built the WISE BCP-300 spacecraft bus, which launched in December 2009 under contract to NASA’s Jet Propulsion Laboratory. During its original 10-month operation, the WISE cryogenic mission collected an immense storehouse of information with far greater sensitivity than previous missions. The WISE satellite accumulated more than 2.7 million images taken at four infrared wavelengths of light, capturing everything from nearby asteroids to distant galaxies.