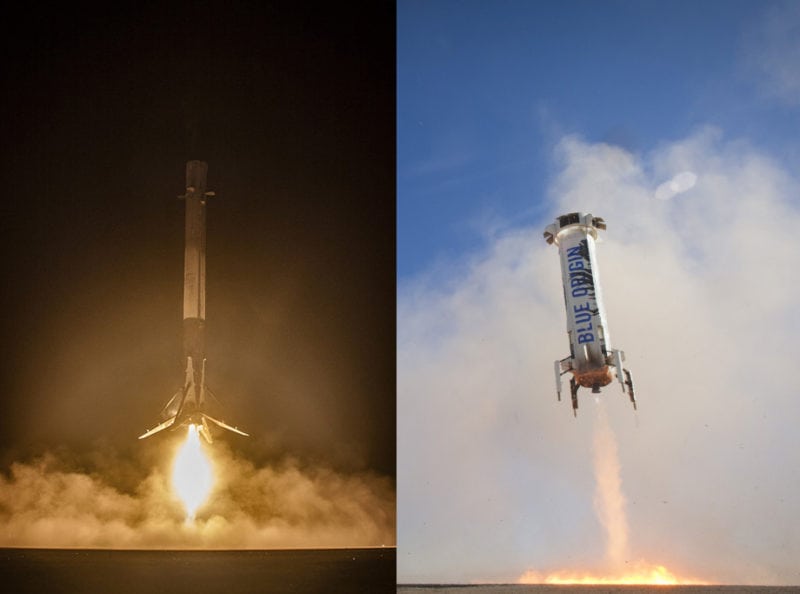 [Via Satellite 11-10-2016] Despite a vision from top Air Force officers that reusable rockets can play roles in future military missions, a conservative safety culture on launch ranges and institutional bureaucracy are slowing the service on its path to embracing the technology and, accordingly, low cost launch, when it is ready in four to five years.

The Defense Advanced Research Projects Agency (DARPA) is developing a program with a goal of launching 10 times in 10 days to demonstrate aircraft-like operability, cost efficiency and reliability. Called XS-1, this program will be capable of deploying a small expendable upper stage to launch a 3,000 pound spacecraft to earth orbit at a cost of $5 million, which the agency calls 10 times less than today’s launch systems. DARPA plans to have XS-1 flight tests by 2020.

A pair of United States-based companies are demonstrating reusable rocketry. One, Space Exploration Technologies (SpaceX), led by billionaire Elon Musk, will soon be a supplier of launch missions to the Defense Department. SpaceX has demonstrated a number of landings, on both land and sea, of its Falcon 9 first stage. The other, Blue Origin, led by another billionaire in Jeff Bezos, is focused on the commercial market but has also made a handful of first stage landings of its own. Blue Origin intends to fly its New Glenn reusable rocket for the first time before the end of the decade.

Outgoing Air Force Space Command (AFSPC) chief Gen. John Hyten, the new chief of U.S. Strategic Command (USSTRATCOM), believes reusable rockets can play a role in preventing a Space Pearl Harbor, or a disabling attack against the United States in space. Hyten, as far back as 2002, has warned of a Space Pearl Harbor due to vulnerable targets provided by the growing commercial and military use of space.

The idea is that as launches get more affordable, they’ll also get smaller as the Pentagon will have a reduced need to fly “Battlestar Galactica-style” billion-dollar satellites. If a space war were to erupt and a critical Pentagon satellite was taken out, the military could quickly launch a new satellite to replace it.

But the problem is that the Defense Department’s current expendable launch vehicles, ones used only once, and infrastructure were originally developed in the 1950s by modifying ICBMs. From that has grown a safety culture that was focused on effectively performing a single launch while ensuring that rocket did not end up in communities surrounding launch facilities.

“Nobody wants to go and testify before Congress on how they dropped a rocket on someone’s head because they tried something new,” commercial space advocate and industry consultant Rand Simberg said in a recent interview.

Simberg, who worked on advanced concepts coming out of the Space Shuttle program at Shuttle-prime contractor Rockwell International, said the Air Force is stuck in a high-cost satellite paradigm where launch reliability is paramount. Simberg said the high price of the current state of launch, and its infrequency, requires satellites to be light and reliable, which made the satellites expensive. Simberg said a vicious circle emerged where because the satellites were expensive, a focus was made on launch reliability, a circle that the Air Force has found hard to break.

Charles Miller, president of NexGen Space LLC, believes the U.S. could soon be part of a world, led by Musk and Bezos, with fully-reusable launch vehicles that provide weekly and, eventually, daily launches. Miller believes this world of reusable rockets will drive down the price of launch and will disrupt the federal government’s launch infrastructure. This disruption, Miller said, will impact the Air Force’s range safety system, FAA integration of launches into the air traffic control system, the FAA Office of Commercial Space Transportation’s (AST) launch licensing system and NOAA’s remote sensing licensing and spacecraft taxation system.

“We live in a world where someone worth billions is competing against someone worth more than $50 billion and both are investing in reusable launch vehicles,” Miller said in a recent interview, highlighting the maturation speed of reusable rockets.

One problem is that the Air Force is simply not ready to track multiple launch vehicles in the sky at once. Outgoing Air Force Space and Missile Command (AFSMC) chief Lt. Gen. Samuel Greaves said, via a spokeswoman, that the fly-back aspect of reusable rockets drives new capabilities needed to protect the public from multiple vehicles in flight simultaneously. Rock, via another spokeswoman, said the Air Force is exploring the additional use of phased array technology and unmanned aerial vehicle (UAV) platforms to increase its multiple object tracking capabilities. However, Rock said, the key limiting factor is the capacity to send destruct commands to multiple vehicles to protect the public should any rockets become errant.

The Air Force is counting on a technology called the Automated Flight Safety System (AFSS) to help enhance range architecture and bridge this gap. Air Force Senior Materiel Leader for Range and Network Division Col. Thomas Rock told Defense Daily in late September that AFSS is an on-board system that uses either an internal navigation system or one or two GPS units to determine if a rocket has veered off its flight path and should, accordingly, self-destruct.

The Air Force currently requires humans to issue this termination command. The goal of AFSS is to be a vehicle-based system that protects property and life in the event of an off-path vehicle. Air Force spokeswoman Capt. Victoria Porto said the Air Force is working with launch vehicle providers to ensure the concept of operations, procedures and ground systems are ready to support future AFSS launches.

Rock said AFSS will reduce the amount of equipment, including radars and telemetry dishes, required to launch a vehicle safely. These radars are old and sometimes interfere with launches as discovered when the Air Force had to delay a mission in March 2014 because a tracking radar caught fire.

Rock said AFSS is that is similar to how the Air Force performs air-to-ground missiles on a test and training range as these missiles have their own flight termination system. Hyten, in early 2015, called for AFSS to be certified for by around the time the range at Vandenberg AFB would be shut down to accommodate the Joint Space Operations Center (JSpOC) being moved. Rock, in his late September interview, said this took place “recently.”

Porto said the range is working with the launch provider to qualify an AFSS to satisfy the positive control requirement, but that the launch provider determines the milestone schedule. SpaceX spokesman John Taylor said Friday the company plans on implementing AFSS in first quarter calendar year 2017 and that the company would use AFSS on all launches moving forward.

Rock said the Air Force has reduced its “turn time” from 90 to 60 days on both the eastern and western ranges. Turn time, Rock said via a spokeswoman, means the number of days prior to launch that a launch vehicle provider can adjust trajectory or vehicle configuration parameters. The service, she said, needs this lead time to perform analyses that determine safety criteria for public protection and range instrumentation coverage plans.

Another issue preventing the Air Force from moving forward faster to automated flight safety on ranges is the paradigm known as “127-1.” James Bennett, who was vice president of external affairs and president at American Rocket in the 1980s and early ’90s, said 127-1 is a basic chapter of Air Force regulations that deals with safe operation of launch ranges. Bennett said it mandates that there be a separate range safety office and hierarchy independent of the operational commands. He said 127-1 also requires anything launched on the range to be under the positive identification and control at all times and that thrust termination can be commanded at any time.

While 127-1 has been successful at protecting the public, 127-1 reduces the ability of the Air Force to rapidly launch rockets as it requires humans in-the-loop. Bennett said there has never been a third party fatality or even serious injury from launch vehicle operation. The Pentagon, as part of its Third Offset initiative, wants decisions to be made much faster than humans can think. Thus, where automated flight safety systems fits into launch.

The launch range at NASA’s Wallops Flight Facility on the eastern shore of Virginia may provide clues to range innovation the Air Force may later adopt to improve responsiveness for launch. NASA Deputy Director for Strategy at Wallops Jay Pittman told Defense Daily in October that Wallops’ history with sounding rockets, small rockets ranging between seven and 65 feet tall that collect important scientific data and conduct engineering tests, allows it to try new things on the range.

Pittman said Wallops is realigning its airfield to be more of a support element that could accommodate a horizontal return of a reusable stage. Wallops, he said, has two runways, one of which is 9,000 foot long that is also “pretty” wide. He said Wallops is also working with the FAA to increase the airspace around the runway such that the transit to the runway would be through restricted airspace.

Pittman also said Wallops is expanding the capability of its range control center. NASA, he said, awarded Wallops a “substantial” amount of money to place the experiment and payload employees in their own building and allow the range control center to focus on range operations. Pittman said this emulates a model found at the Air Force’s 45th and 30th space wings, which are responsible for launches at Cape Canaveral Air Force Station, Fla., and Vandenberg AFB, Calif., respectively.

Pittman said Wallops has constructed a flat pad area on Wallops Island that would be suitable for a number of operations, including a return. NASA, he said, has also supported improvements to Wallops’ radar and command systems and telemetry systems. Pittman said Wallops is designing new instrumentation systems to optimize for the mission set it sees in the future. Wallops’ reconfigurable range, Pittman said, also prepares the facility for reusable rockets.

A top Pentagon space official believes the Air Force is performing its due diligence toward the ability to use reusable rockets. Deputy Assistant Secretary of Defense for Space Policy Doug Loverro said Oct. 25 the Air Force doesn’t have a condition of launch that reflects that it can’t do something, but instead that it doesn’t need to do something.

“The minute we need to do something, I’m fully confident (with) the kind of creativity that we’ve already seen in launch…I think the solutions will be brought to bear,” Loverro said at the Center for Strategic and International Studies (CSIS) think tank in Washington. “I’m far less worried about how our launch will respond to our next architectural needs than how our architectures will evolve to meet our military needs.”

Porto, the Air Force spokeswoman, said though the service isn’t ready to launch 10 times in 10 days as dictated by DARPA’s XS-1, she said the ranges meet the current requirement for launch interval, which is no greater than 72 hours between the end of range support to the first mission and the start of the second mission. Porto said launch intervals may occur in less than 72 hours, on a case-by-case basis, as mission needs dictate.

Air Force Gen. Jay Raymond is the new head of Air Force Space Command, replacing Hyten. Greaves was nominated to become the next director of the Missile Defense Agency (MDA), but Air Force spokeswoman Alicia Garges said a timeframe has not been set for his transition. The Air Force’s prime contractor for ranges is Range Generation Next (RGNext), a joint venture of Raytheon and General Dynamics.