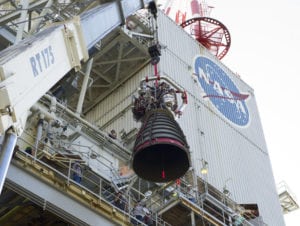 [Via Satellite 07-11-2016] Aerojet Rocketdyne is increasing its presence at NASA’s Stennis Space Center in Mississippi to handle assembly and testing of the AR1 advanced liquid rocket engine. The company is expanding its Center of Excellence for Large Liquid Rocket Engine Assembly and Test at the facility, and consequently increasing the number of Aerojet Rocketdyne employees at Stennis from 130 people to more than 200, based on current expectations.

The company is developing the AR1 to support the United States’ mandate to eliminate reliance on the Russian RD-180 engine for national security space launches by 2019. United Launch Alliance’s (ULA) Atlas 5 rocket currently depends on the RD-180, which is used for defense, civil and commercial missions. Blue Origin is also producing a replacement, the BE-4 engine, which is currently ahead of the AR1 in development.

Aerojet Rocketdyne’s facility at Stennis Space Center is already home for assembly and testing of the RS-68 engine that powers the Delta 4 family of launch vehicles, and the RS-25 engine that will power NASA’s Space Launch System. As part of the buildup for RS-25 assembly and testing, Aerojet Rocketdyne is locating its RS‑25 low-pressure turbo-pump assembly at the company’s facility at Stennis Space Center.