Investments in IT Collaboration, Simplification to Can Help Up Efficiencies 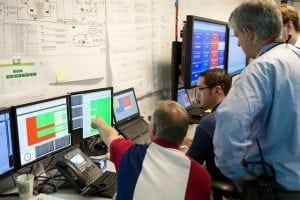 [Via Satellite 11-09-2015] Streamlining IT operations through a more efficient use of tools, technology and business practices can help oil and gas companies cut overhead and up their game in a cost-driven environment.

Speaking at the Nov. 5 workshop “How to Troubleshoot Communications Technologies in the Most Hazardous Environments,” Roland Sauermann, president at SGV International, and other panelists spoke to the challenges of addressing IT issues in dangerous, off-shore environments, particularly during a time when IT professionals are generally being asked to “do more with less.”

The panelists stressed organization, best practices and the need to work closely with customers to communicate and solve off-shore communications issues quickly and efficiently as they occur — issues that can range from power glitches, problems with data integration and cabling, among others. But with a value chain that spreads over several organizations and often across hundreds of miles, diagnosing the issue and coordinating an effort to remedy the problem can inherently present problems.
“Sometimes the problem is very far away from the symptom. So, you really have to get to the root cause and the right group, so that you can begin problem solving,” said Sauermann. “It could be an offshore rigging tee, it could be various support organizations that extend from the service company all the way through to the owner organization.”

The oil and gas industry is seeing a higher business impact on IT and communications from new well controls that have a high dependency on real-time drilling and other areas, such as telemedicine. But with digital elements permeating through the sector, issues are becoming wider and more difficult to diagnose.

“Sometimes issues are caused by the most inconspicuous things. If a third party comes onto the rig, opens up their laptop and exposes something to the network, helping determine and diagnose the issue is part of the challenge. Sometimes we don’t have the toolset back at the Network Operations Center (NOC) to do that level of investigation and we need to work in part with the IT teams to determine the next step and how to get down to identify that source,” said Keith Johnson, senior vice president and general manager of the energy division at Speedcast.

Issues that are not specifically IT-related can also arise, which can both cause an IT issue and then exacerbate attempts to troubleshoot and remedy it.

“Sometimes it is something as silly as having people not put things back in the right place in the management office, something like that can break down quickly,” explained Jereme Pitts, chief operating officer at Librestream Technologies, a company that provides technologies that enable mobile enterprise collaboration such as video conferencing and mobile devices.

Training and shift changes can also be an issue when attempting to work out a problem.

“With oil and gas and the crew changes that occur, lots of different things happen,” said Pitts. “I can’t tell you how many times I’ve seen someone interpret how to react differently than the previous crew. Those things definitely can plague you, when something isn’t working but literally isn’t connected to the actual product.”

To remedy these issues both internally and across the value chain, the panelists pointed to increased efforts in communication and organization.

“As a service provider we typically work with the customer or the end user to establish the call matrix, where do they want us to send and email, who do they want us to call, so that our job is basically to ensure that company representative has been contacted and then we let the customer direct where we go next,” said Johnson. “It’s a real coordinated effort and that’s where, especially in our business, the trust and the relationship goes a long way.”

With issues still prevalent in the practices established across companies and segments in the oil industry to accommodate and troubleshoot IT problems, panelists noted this will likely be an area where companies will have to invest money and time to work out efficiencies in the coming year. As they work through streamlining practices in inherently vast, complex organizations, however, it is critical that companies and IT departments focus on communicating with those who supply and rely on their network as much as possible.

“From a practical standpoint it goes back to working with your customer to let them understand the tools that you have available. In almost every case, an IT organization has its own sets of tools. Maybe a different layer, but from our standpoint, if it’s a VSAT, for example, we’re using tools that can hopefully pre-identify if we have a fault somewhere. If we have a degradation in the signal, we want to be proactive and report that to the customer,” said Johnson.

And while it’s important to keep training up to date, good leadership is also necessary when navigating a growing and difficult environment.

“When you have these various elements to the value change, when you have one piece of that, sometimes people are looking to you; and to have the tools to figure out if your systems are operating the way you want is critical for your company,” said Sauermann.