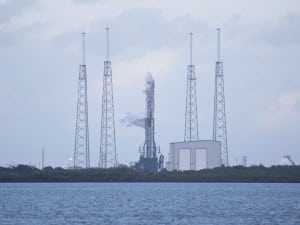 [Via Satellite 06-27-2014] SpaceX filed a Motion for Leave to include a second complaint in its lawsuit against the U.S. Air Force over last year’s order for 36 rocket cores from the joint Boeing–Lockheed Martin venture United Launch Alliance (ULA). Prompted by a letter Sen. John McCain (R-Ariz.) sent to Under Secretary of Defense Acquisition, Technology, and Logistics Frank Kendall, SpaceX claims that new information gathered from this letter requires an amendment to its complaint, and furthermore that had the information been brought to light earlier, the Air Force would have selected SpaceX over ULA to launch the Air Force’s satellites.

Sen. McCain’s June 20 letter is the second the congressman has sent inquiring about the Air Force’s Evolved Expendable Launch Program (EELV), more specifically requesting details regarding the purchase of the RD-180 engine, which is used to power the Atlas 5 rocket. In the letter, McCain asks about the method by which the engines are purchased. ULA buys the engines from RD Amross, a U.S. subsidiary of Russian manufacturer NPO Energomash. Allegedly, RD Amross buys the engines from NPO Energomash for significantly less than the price that it then charges to ULA, driving up costs for the EELV program.

“Very little information is publically available on the actual costs to build the Russian RD-180 engine compared to what ULA pays for them. But, I am aware of claims that the engines have been sold by NPO Energomash to RD Amross at a much lower price than RD Amross charges ULA for them,” wrote Sen. McCain. “Given the foregoing and the opacity of costs associated with the procurement of the RD-180, it is important for the Air Force to establish affirmatively the fairness and reasonableness of how much it (and therefore the U.S. taxpayer) is paying for the RD-180 — despite the fact that it procures the RD-180 under a firm fixed-price contract line item.”

Sen. McCain asked Kendall to verify claims that ULA, and hence the Air Force, are paying inflated prices for the RD-180 resulting in profits potentially greater than 200 percent for a Russian company. He also asks if the Air Force is allowed to procure contracts of this nature. SpaceX claims that ULA failed to comply with rules to accurately determine pricing information prior to the sole source award.

“Had ULA complied with its legal obligation to provide certified cost and pricing data for the RD-180 engines and other rocket component parts, it would have been forced to confront the fact that at least one of its suppliers is fleecing the United States taxpayer,” SpaceX wrote in its latest motion. “Had the Air Force conducted a rational cost and price analysis as required by law, it would have realized that the sole source pricing charged by ULA included exorbitant profits for ULA’s Russian supplier at the expense of the American public.”

SpaceX further alleged that had this information been brought to light earlier, the award would not have gone to ULA.

The political tension between the United States and Russia has become increasingly more taut as a result of the Russian government’s actions in Ukraine. The U.S. has placed sanctions on several Russian officials as well as some Ukrainians. Congress has actively debated publically funding a domestic engine to replace the RD-180. The House of Representatives passed the Fiscal Year (FY) 2015 Defense Appropriations Bill allocating $220 million, while the Senate’s FY 2015 National Defense Authorization Act (NDAA) set aside $100 million. Sen. McCain included an amendment in the Senate version banning the purchase of additional RD-180 engines once the current contract expires.

Prior to Sen. McCain’s most recent letter, ULA signed contracts with several U.S. companies to evaluate a new liquid oxygen/hydrocarbon engine. The company is continuing to work with RD Amross to determine the long-term feasibility of the RD-180. ULA’s target launch date with a next-generation engine is 2019. ULA intends to select an alternative domestic engine supplier by the end of 2014.

“While the RD-180 has been a remarkable success, we believe now is the right time for American investment in a domestic engine,” said Michael Gass, ULA president and CEO in a June 16 statement. “At the same time, given that ULA is the only certified launch provider of our nation’s most important satellites, it is critical that America preserve current capabilities and options while simultaneously pursuing this new engine.”