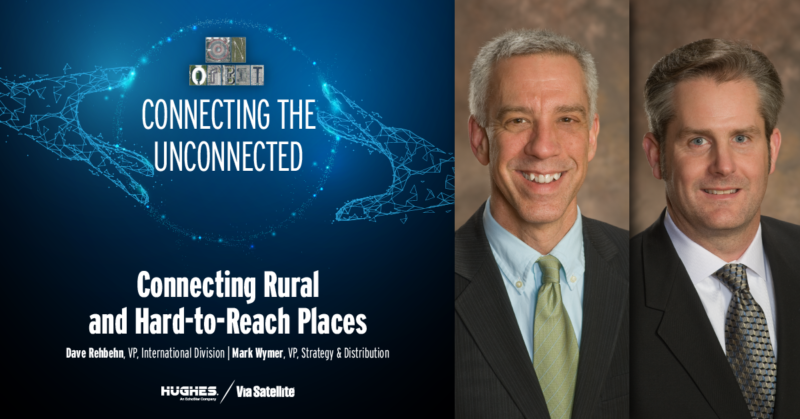 According to the ITU’s The State of Broadband 2019 report released in late September, the world achieved greater than 50% global broadband Internet penetration in 2019 — a major milestone. However, significant challenges remain, and a significant portion of the population remains disconnected from even the most basic form of internet connectivity.

We’ve been exploring the topic of bridging the Digital Divide from different angles over several episodes of On Orbit. With billions of people around the world, including in the U.S., living in rural and hard to reach places, building technologies to meet connectivity’s growing demand is a multifaceted challenge. In the first episode of our special podcast series, “Connecting the Unconnected,” sponsored by Hughes, we’re joined by Hughes Network Systems Dave Rehbehn and Mark Weimer to define connectivity challenges in rural and remote regions and address the viability, potential, timing, and impact of specific solutions.

In this episode, we define the challenges of connecting those in rural and “hard to reach” locations. Dave and Mark explain why satellite broadband is considered core to achieving higher and improved penetration to these regions, owing to its benefit of reaching remote areas at lower CAPEX than fiber.

We also discuss how connectivity challenges are only going to increase in the near future. According to the Cisco Visual Networking Index: Global IP traffic will triple over the next 5 years to 4.8 Zb per year (1 zettabyte = 1 trillion Gb) by 2022. The number of devices per person will average more than three by 2022. And, there will be three times as many devices as people on the planet. Adding to this demand, implementation of rising technologies like AI, ML, and IoT in homes, businesses, and on planes, ships, and cars requires a ubiquitous and interoperable network. People in rural and remote regions cannot be left behind! Global economic equality is at stake!