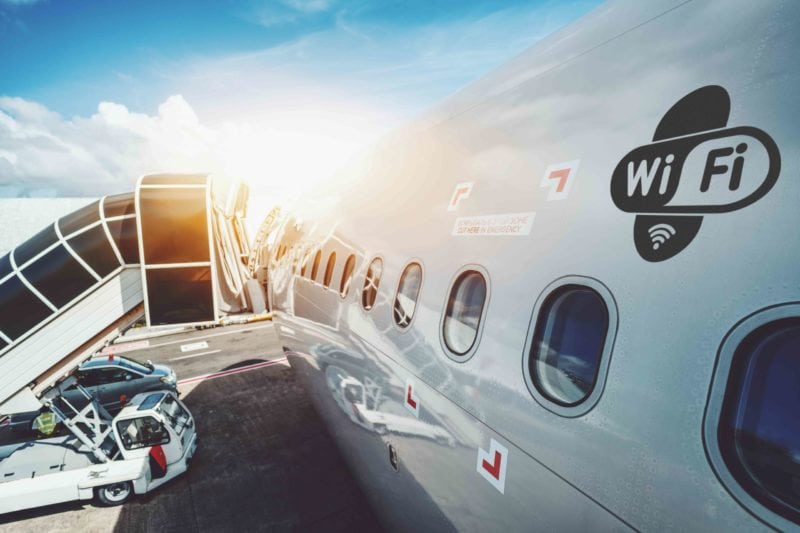 Inmarsat and Hughes Network Systems confirmed that they have been secretly collaborating on a new satellite connectivity solution that will allow commercial airlines to offer free, in-flight Wi-Fi. The service, GX+ North America, will be ready for rollout on prototype flights later this year, according to the October 20 announcement.

Hughes and Inmarsat describe the GX+ North America service as a combination of capacity from Hughes’ Jupiter High-Throughput Satellite (HTS) constellation across North America with coverage from Inmarsat’s Global Xpress (GX) HTS satellite network. The partners said the combination will make it possible for North American airlines to meet increasing passenger demand, including the surge in traffic expected from free-of-charge in-flight Wi-Fi.

When asked how long Hughes and Inmarsat have been working on the GX+ solution, Hughes Spokesperson Sharyn Nerenberg told Via Satellite, “This solution was crafted through ongoing conversations with Inmarsat – like we have with our various partners — about how they can leverage the Jupiter system to enable exceptional connectivity to airlines. Our teams have been working together on the GX+ North America project for some time culminating in Inmarsat’s announcement.”

“North American airlines no longer need to compromise on speed, reliability, availability or coverage for in-flight broadband, even when flying at full capacity over the busiest airport hubs. This also offers full flexibility for route planning, even on short notice, as the solution can cover any route worldwide through the GX global network — whether to Hawaii, Canada, Bermuda, the Caribbean, across the Gulf of Mexico, to Central and South America, across the Atlantic or even to the most extreme northern latitudes,” Inmarsat wrote in its company announcement.

Inmarsat will act as the end-to-end managed service provider. Hughes and Inmarsat said that full commercial availability is scheduled for 2021 following prototype service roll outs in 2020.

Rupert Pearce, CEO of Inmarsat, called his company’s partnership with Hughes a “game-changing collaboration” in the In-Flight Connectivity (IFC) market. “Combining [Hughes’] market-leading depth of capacity with Inmarsat’s award-winning passenger connectivity solution uniquely delivers in-flight broadband that is consistently superior regardless of the number of passengers using the service or where they are travelling,” Pearce said in a statement. “It is truly a ‘no compromise’ solution for airlines that no other service provider can offer. We’ve also ensured the transition path for airlines upgrading from other connectivity providers is simple, quick, and cost efficient.”

Hughes and Inmarsat said they would expand the service globally as they launch additional GX and Jupiter satellites, including Hughes’ Jupiter 3 satellite and Inmarsat’s next seven GX satellite payloads — 6A, 6B, 7, 8, 9, 10A and 10B. Arianespace launched Inmarsat’s GX5 satellite last November.

This announcement comes after another satellite company expansion into the IFC market. In September, Intelsat agreed to acquire Gogo’s Commercial Aviation business for $400 million in cash. The deal creates a vertically integrated IFC business with service provider and satellite operator.