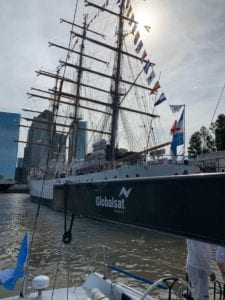 The installation was done in support of its entrant in the XXIV Oceanic Regatta Buenos Aires – Rio de Janeiro. The Argentine Navy regatta yacht Fortuna III, which was equipped with a Thales VesseLINK terminal featuring the Iridium Certus 700 service, finished in first place in its category. The technical sport demands competent and reliable information and telecommunication systems. Globalsat said the IP-based satellite terminal allowed the crew to access meteorological applications, nautical charts, send images, videos and be in permanent communication. The Thales VesseLINK terminal allowed the crew to access data connections of up to 704 kbps.

“Being able to visualize, in the context of a competition, constant and real-time updates of meteorological information, nautical charts and positions of the other competitors was decisive for the achievement of the result we obtained,” said Argentine Navy’s Luis Sgrilletti, Captain and Commander of Fortune III.