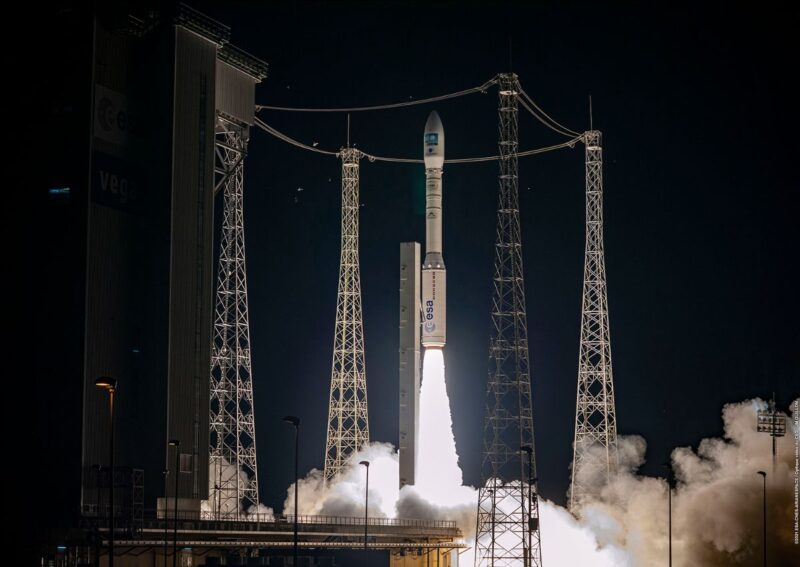 Arianespace launched the second high-resolution satellite in the new Airbus Defence and Space constellation on Monday on a Vega rocket, along with four rideshare cubesats.

The Vega launch vehicle took off from Europe’s Spaceport in French Guiana on Monday at 10:47 p.m. Kourou time. The Airbus satellite, Pléiades Neo 4 separated on a sun-synchronous orbit at an altitude of 625 km while the four auxiliary payloads separated at 551 kilometers. The mission lasted one hour and 45 minutes.

Airbus said that Pléiades Neo 4 will reach its final 620 km Sun-Synchronous Polar Orbit, within the next few days. The satellite will be phased 180 degrees with Pléiades Neo 3 on the same orbit to begin the constellation. These Earth Observation (EO) satellites will allow for daily imaging of any place on Earth at 30 cm native resolution.  The satellite was fully funded and manufactured by its operator Airbus.

“Pléiades Neo will offer a truly best-in-class capability to our customers and will strongly enhance our position in the very high-resolution market” commented François Lombard, head of Intelligence at Airbus Defence and Space.

The last two satellites of the Pléiades Neo constellation are set to launch in 2022 on the next-generation Vega C launch vehicle. The completed four-satellite constellation will allow for daily imaging between two and four times a day. These new satellites will work with the existing Pléiades satellites and the rest of the Airbus EO satellite fleet.

The mission also carried four cubesats: LEDSAT, an educational project from the University of Sapienza in Italy, participating in a European Space Agency (ESA) program; RADCUBE, a cubesat from Hungarian company C3S; SUNSTORM, a cubesat from Reaktor Space Lab (RSL) in Finland; and BRO-4, a spectrum monitoring satellite for Unseenlabs in France.

This was Arianespace’s seventh successful launch of the year. The operator is preparing for a OneWeb launch on Friday, Aug. 20.