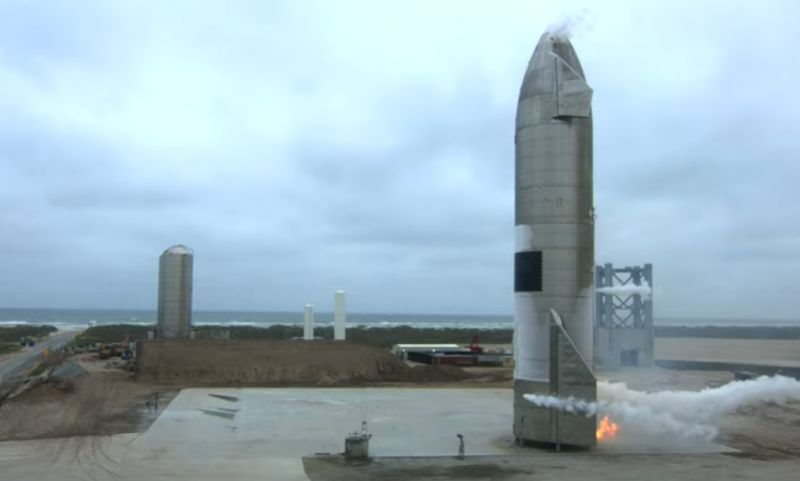 Starship SN15 prototype back on the launchpad after a successful high-altitude test on May 5. Screenshot via Facebook.

The prototype SN15 took off from the site in Boca Chica, Texas, on May 5. Fueled by three Raptor engines, Starship climbed toward a 10 km altitude, at which point the engines turned off. The rocket executed a horizontal flip, and began a horizontal, unpowered descent back to the launch pad. In the final moments, the three engines reignited to flip the rocket stage back to a vertical position, and it landed successfully on a single engine. The test lasted about six minutes.

During previous tests over the past few months, the rocket either broke apart upon landing, or on the most recent test with SN11, it exploded mid-air. SpaceX commentator John Insprucker, who hosted the live stream, said that multiple upgrades were put in place for SN15 after the most recent crash.

Starship is being designed as a reusable vehicle to take both crew and cargo to Earth orbit, the Moon, and Mars, and also to deploy satellites. Starship is designed to carry more than 100 metric tons to orbit — with a payload compartment larger than any fairing in operation or development.

SpaceX COO Gwynne Shotwell recently spoke about the Starship program in an interview with Via Satellite. She said that Starship is Musk’s primary focus at SpaceX at this point, and he is taking the lead on the rocket’s development.

“The thing about Starship is, we know how to design rockets and fly rockets. What we have failed to do to date is to design and fly a rocket that is easily producible and fully reusable,” Shotwell said. “It’s still hard to produce a Falcon 9. It’s a lot of work and it’s very expensive. The focus for Starship is to make it highly producible, highly reliable, and 100 percent operationally reusable, both for the first and second stage. That’s hard.”