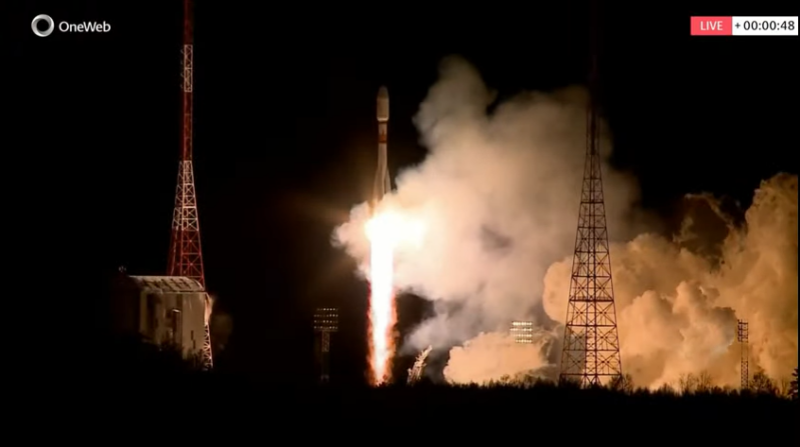 A successful launch capped off a challenging and eventful year for OneWeb, in which the company went into Chapter 11 bankruptcy, and emerged under new ownership. Arianespace and its Starsem affiliate launched 36 OneWeb satellites on a Soyuz 2-1b rocket from Russia’s Vostochny Cosmodrome on Friday, Dec. 18 at 12:26 GMT.

The satellites were deployed in a series of nine payload separations, starting an hour and 18 minutes after liftoff, with the last just under four hours after liftoff. To execute this, the Fregat upper stage performed multiple reignitions/propulsion burns while delivering the OneWeb satellites into a near polar orbit at an altitude of 450 km.

OneWeb confirmed signal acquisition on all of its satellites on Friday afternoon, bringing the constellation of satellites to 110. This was OneWeb’s fourth launch, all performed by Arianespace.

This launch juxtaposed against OneWeb’s last launch on March 21 — which took place just days before the company filed for Chapter 11 bankruptcy. A source told Via Satellite at the time that just an hour before the March launch, news filtered through the company that investor Softbank had decided to pull funding.

But that was not the end of the story for OneWeb. OneWeb emerged from Chapter 11 in November, under the ownership of the U.K. government and Bharti Global. The company will now continue to build out its constellation of 650 satellites in Low-Earth Orbit to provide low-latency broadband service. OneWeb Satellites, a joint venture with Airbus, has been reactivated and the dual production lines brought back into service. OneWeb recently resumed ground network partnerships with Hughes Network Systems and Intellian.

OneWeb said this launch puts the company on track to offer global services to customers starting with the United Kingdom, Alaska, Northern Europe, Greenland, Iceland, the Arctic Seas, and Canada in 2021, with global service following in 2022.

“It’s inspiring to be part of a fast-returning organization refocused on our mission of bringing connectivity to everyone, everywhere. Each launch moves us closer to our goal of building this much needed global, secure, trusted, enterprise-grade broadband network, powered from space. We look forward to offering our commercial services to global users,” commented OneWeb’s new CEO Neil Masterson.