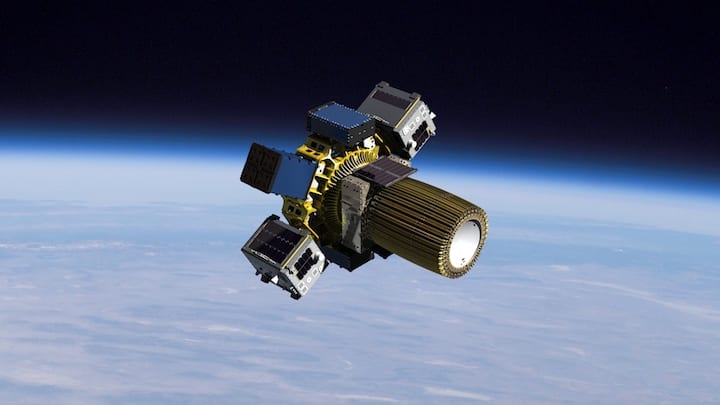 Spaceflight’s Sherpa-FX will carry 14 spacecraft on the SXRS-3 mission in December.

Spaceflight is rolling out its next-generation orbital transfer vehicles called the Sherpa series — a “last mile” delivery service for smallsats on rideshare missions. The first Sherpa-FX will carry 14 spacecraft on SpaceX’s SXRS-3 mission set for December.

The basic model, a hexagonal Sherpa-FX, has multiple ports that multiple smallsats can attach to. In action, the Sherpa-FX separates from a launch vehicle, and satellite separations are then initiated by onboard avionics. It can execute multiple deployments and provides independent deployment telemetry. This vehicle can deliver satellites to altitude changes or phases of specific orbits, and minor inclination changes.

Beyond the Sherpa-FX, Spaceflight on Thursday announced two Sherpa variations with their own propulsion systems coming in 2021. The Sherpa-LTC’s has a high thrust, bi-propellant, green propulsion subsystem from Benchmark Space Systems, and can provide rapid orbital transfer.

All three are compatible with various launch vehicles from the Falcon 9 to a PSLV, including vehicles in development from Firefly Aerospace, Relativity Space, ABL Space Systems, and Virgin Orbit. The orbital transfer vehicles are designed to give satellites the flexibility to move between launches to deal with delays, with minimal impact to the launch provider.

This is the next-generation and a complete redesign of the two original Sherpa vehicles that flew on the SSO-A SmallSat Express mission in December 2018.

Roberts said the company decided to develop the next-generation series to help customers take advantage of SpaceX’s rideshare pricing, announced last year. Spaceflight wanted to allow as many smallsat customers as possible to share one port. If Sherpa were fully loaded with only cubesat deployers on board, for example, it could handle 32 3U cubesats.

The orbital transfer vehicle line is a response to the evolving needs of smallsat customers. Rideshare isn’t good enough for some anymore, he said.

“We still have our standard rideshare capabilities with numerous launch providers, and we’ll continue to offer those services. For customers that want to optimize use on a single port on SpaceX rideshare, or they need to get to a different orbit than what SpaceX offers, or there’s multiple customers that need different orbits, that would be the value proposition of the Sherpa.”

He gave the example of Starlink missions to mid-inclination. “The altitude is so low, most customers can’t find it useful. But with Sherpa and putting them on top, now we can boost up to an operational altitude for our customers, since most of our customers’ small satellites don’t have a lot of internal propulsion.”