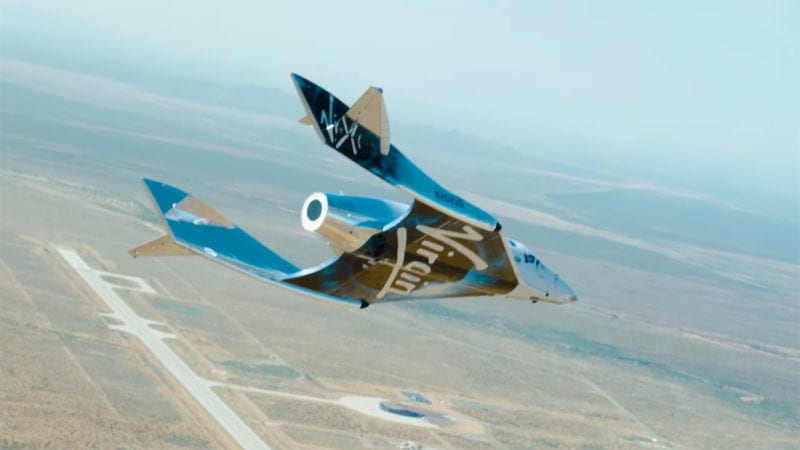 SpaceShipTwo Unity achieved a glide speed of Mach 0.85 after being released from VMS Eve at an altitude of 51,000 feet. The spacecraft completed multiple test-points before returning to land at Spaceport America. The successful flight follows the completion of Virgin Galactic’s first test flight in May

The successful flight is another step toward the launch of Virgin Galactic’s planned commercial service. The company said it would complete an extensive data review of the second SpaceShipTwo flight to prepare for upcoming powered spaceflights from Spaceport America. Virgin Galactic said it also must complete final modifications to the spaceship customer cabin and conduct detailed inspections of the vehicle and systems.

“I am thrilled with the team’s hard work to complete today’s test flight successfully,” Virgin Galactic and The Spaceship Company CEO George Whitesides said in a statement.  “It was an important test that, pending data review, means we can now start preparing the vehicles for powered flight.  Our focus for this year remains unchanged on ensuring the vehicles and our operations are prepared for long-term, regular commercial spaceflight service.”

Via Satellite recently interviewed Virgin Galactic COO and President Enrico Palermo, who spoke about the company’s vision for the future of human spaceflight and provided details about its partnership with NASA. “To date, we’ve invested more than $1 billion in private capital to build a reusable human suborbital spaceflight system,” Palermo said in the interview. “That core mission is universal fascination with space. Our mission does not change from opening space to change the world for good.”