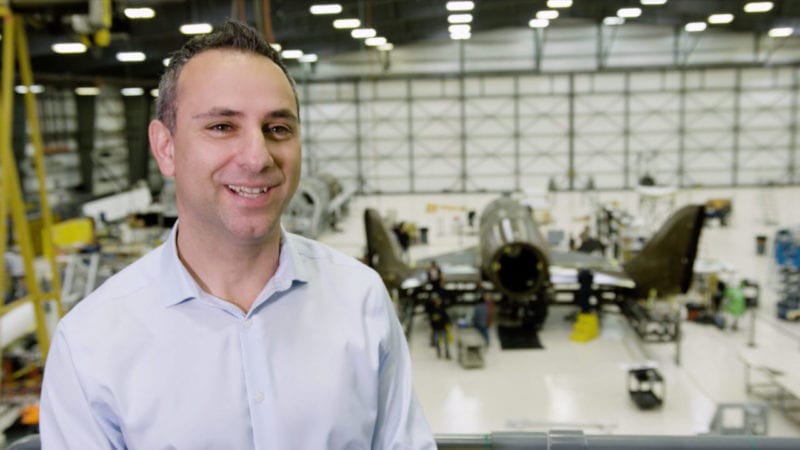 Virgin Galactic, the Richard Branson-owned company working toward commercial spaceflight with its SpaceShipTwo vehicle, last month announced a partnership with NASA to develop technically feasible high Mach vehicles. Through this partnership with NASA, Virgin Galactic is looking to develop a vehicle for safe and efficient high speed air travel, with a focus on customer experience and environmental responsibility.

Via Satellite spoke to Enrico Palermo, Virgin Galactic COO and president of The Spaceship Company, its wholly-owned aerospace manufacturing and development subsidiary, about the design challenges of developing a unique high Mach vehicle that can be used safely in the future. Palermo said this partnership comes after Boeing invested $20 million into the company’s high-speed mobility work in October 2019. Still in the early stages of the project, Virgin Galactic has hired talent with experience in propulsion and high speed aerodynamics, and has more openings on the team. The company hopes to leverage NASA’s research on supersonic and hypersonic flight with its own capabilities.

VIA SATELLITE: I’d like to start by asking you to explain in your own words — what is a high Mach vehicle?

Palermo: We’re not being prescriptive yet on an exact speed range for our vehicle, but a high Mach vehicle is a supersonic or faster vehicle. We consider SpaceShipTwo a high Mach vehicle, it tops out at just over Mach 3 on a trajectory. Anything higher than Mach 2 is the range we’re looking at. As you approach Mach 5, you get hypersonic. Today, we’re the only entity flying a high Mach commercial winged vehicle with crew on board. That’s part of a stepping stone to a future where we want to bring that into broader opportunities to travel around the planet.

VIA SATELLITE: What are some possibilities that you see in the future for civil application of  high Mach vehicles?

Palermo: Besides a small amount of time when the Concorde was flying, we’ve been traveling around that planet roughly at the same speed, and you probably could argue we’re getting slower in some respects. What we’re doing at high speed mobility is centered around — how can we make it more sustainable and ultimately lower cost in the future to move around the planet faster? Part of the future iteration may be smaller planes, more direct planes, less time in airports, less time in airplanes. Given current circumstances in the world there might be more a desire to do that. We’re focused not just on flying fast, but how do we do it better? How do we do it with the customer experience in mind? How do we make it as sustainable as possible?

VIA SATELLITE: How did your partnership with NASA come about?

Palermo: We’ve had a long-term relationship with NASA. We’re a proud customer with NASA as part of the Flight Opportunities program, where we flew payloads aboard SpaceShipTwo on two flights to space in 2018 and early 2019. NASA has incredible capabilities, incredible history, and critical facilities with its wind tunnels and various other technologies that can support the development of high Mach vehicles. We visited NASA Langley Research Center in the early part of last year and started to really cultivate a relationship. We saw a great cultural alignment. There’s things we can leverage and learn from NASA, and we think there’s things we can share as well from our program, too.

VIA SATELLITE: What will the early stages of the partnership address?

Palermo:  We’ll start to really develop the IP and the building blocks for the vehicle. We will initially be focused with NASA on thermal design, thermal application. Vehicles traveling through the thinner parts of the atmosphere, even at high speeds, generate a lot of heat. How do you manage that heat on the vehicle? How do you design your structures? And the other part is propulsion — what is the right design and architecture for the propulsion for these vehicles? We are leaning towards winged vehicles that are air-breathing for the long term design.

VIA SATELLITE: Is this partnership a continuation of the MOU signed between NASA and Virgin Galactic in 2007 that mentioned collaboration on hypersonic vehicles?

Palermo: That MOU was signed very early in our development as a company, I was part of the team back then. [This] wasn’t like a formal extension of that MOU. The last few years we’ve been appropriately very focused on completing SpaceShipTwo, to getting into flight test, and having a solid march towards commercial service, as well as building the fleet. In the recent years, until most recently, we have prioritized the SpaceShipTwo program and are now pivoting towards the high speed program.

VIA SATELLITE: Can you talk more about the sustainability aspects of this project?

Palermo: There are multiple factors in sustainability — carbon footprint and other other emissions, noise, and commercial sustainability — they all need to come together. NASA is doing a lot on the noise element with the commercial supersonic transport program and its X-59 test vehicle to really understand the level of noise communities around the world notice and tolerate. That’s something that I think is complementary to our efforts. We are focused on noise as well as we start to come up with vehicle designs and concepts.

VIA SATELLITE: You mentioned that one of the earlier challenges that Virgin and NASA will focus on is designing a thermal propulsion system. What are some other challenges to developing high speed vehicle technology?

Palermo: Thermal propulsion [is a challenge], but also structures and how you integrate these vehicles into the airspace. Lifting off the development of SpaceShipTwo, we really believe that if you’re going to integrate these high speed vehicles into the infrastructure, a winged vehicle allows you to integrate into airspace, and land in existing airports around the world. You’re not entering a major city ballistically, you’re entering as a winged vehicle that can control its trajectory. We’ve thought a lot about why winged architecture is a key part.

We start to hit thermal propulsion structures, at these high speeds. There’s work to be done around telemetry and systems. The fluid dynamics change considerably at these higher speeds, part of it is heat, but part of it is related to the noise signature on the vehicles. The challenge is integrating all of these sometimes competing requirements to develop a solution that meets our sustainability goals, and also meets our economic goals.

VIA SATELLITE: How does this partnership and this future technology fit into Virgin Galactic’s mission of providing commercial spaceflight?

Palermo: To date, we’ve invested more than $1 billion in private capital to build a reusable human suborbital spaceflight system. That core mission is universal fascination with space. Our mission does not change from opening space to change the world for good.

But using those existing technologies and experience, we want to start to develop a new series of high speed, point-to-point aircraft. The agreement with NASA allows us to accelerate by bringing together two great teams, two great histories, and different capabilities to the effort. It’s very complimentary. It’s part of our growth strategy for Virgin Galactic. We’ve got a team that is proven, that can do this, and they’ve really started to go after this.