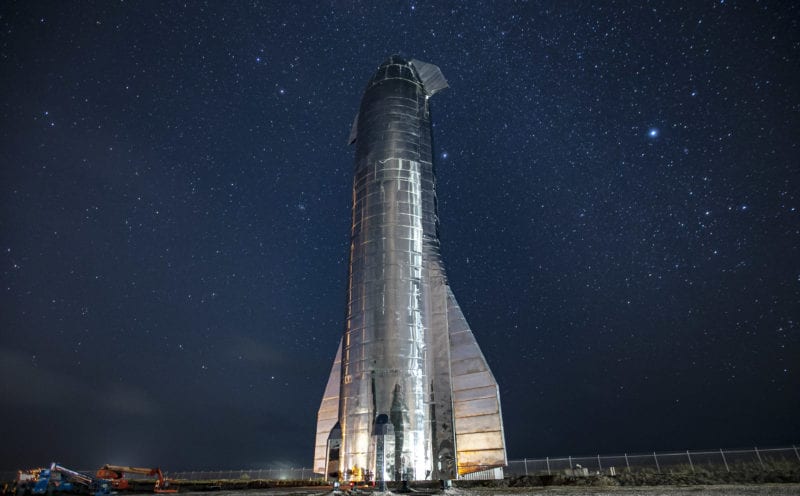 A view of the SpaceX Starship test rocket. Photo: SpaceX

Last week, SpaceX CEO Elon Musk gave a presentation revealing the Starship test rocket, and discussed future plans of an orbital-flight launch targeted for 2020. Although there has been much talk of Starship’s ability to eventually carry out crewed missions, the rocket will also be used to carry cargo to Earth orbit.

There are currently no known customers for cargo payloads, but one official from a commercial satellite operator, who asked not to be named for the story, told Via Satellite that they had been aware for some time that SpaceX’s Starship could potentially carry satellites, and that they have been looking into Starship as a potential launcher, but no commitments have been made.

Later last week, SpaceX posted a specification page on its website, clarifying details between the Starship and Super Heavy. “Starship is the fully reusable second stage and has an integrated payload section. Starship serves as a large, long-duration spacecraft capable of carrying passengers or cargo to Earth orbit, planetary destinations, and between destinations on Earth,” the website reads. As for Super Heavy, “The first stage, or booster, of our next-generation launch vehicle has a gross liftoff mass of over 3 million kilograms (kg) and uses sub-cooled liquid methane and liquid oxygen (CH4/LOX) propellants. The booster will return to land at the launch site on its 6 legs.”

Additionally, Starship boasts a large volume for carrying payloads. “The Starship payload fairing is 9 meters (m) in diameter and around19 m high, resulting in the largest usable payload volume of any current or in development launcher,” SpaceX detailed on its website.

Further, the company claims that the Starship and Super Heavy can deliver satellites to Earth orbit at a lower cost than SpaceX’s previous vehicles. With this, the company mentions that “Starship creates possibilities for new missions, including space telescopes even larger than the James Webb.”

As for planned customers? According to a representative for the company, “SpaceX announced last year that Yusaku Maezawa will be the first private customer to ride around the Moon on what is now known as Starship.”

Musk mentioned that the company had the financial resources to take Starship to the Moon, but that SpaceX would need additional funding to send the rocket to Mars. When asked about the investment needed to send Starship to Mars, SpaceX was not able to comment.