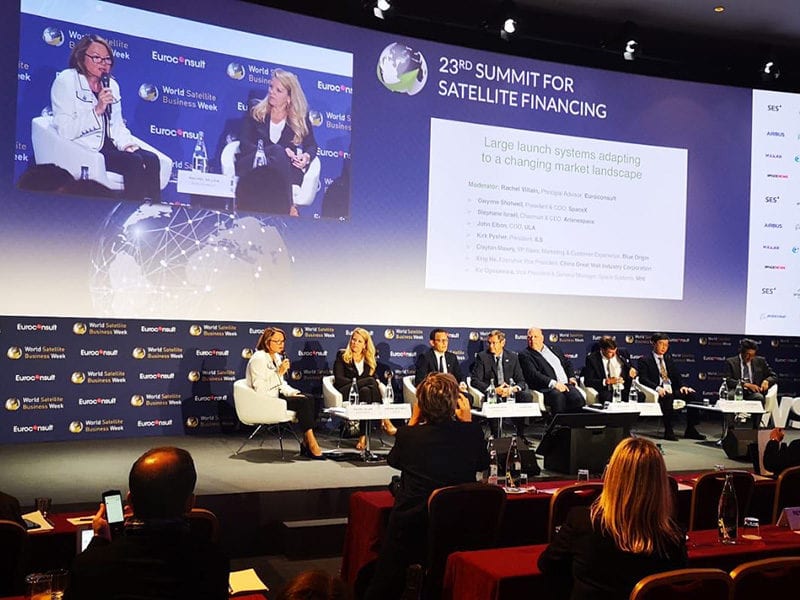 One of the highlights at World Satellite Business Week (WSBW) last week in Paris was the much anticipated launch providers panel, as it featured multiple players from all over the world. The panel titled “Large Launch Systems Adapting to a Changing Market Landscape” featured two previous Via Satellite Satellite Executives of the Year, SpaceX COO Gwynne Shotwell and Arianespace Chairman and CEO Stephane Israel.

Shotwell said that SpaceX has had a successful year in terms of launching satellites, with a projected 18 satellite launches this year. However, it is also getting ready to fly crew this year, which Shotwell admits is a “back-stiffening moment” for the company, and that she was understandably “nervous” about this.

In terms of the actual market itself, Shotwell said it is shrouded with “uncertainty.” She said, “There will be alternative satellite systems as well as Geostationary Orbit (GEO). I am not bearing on the telecoms industry, but there will be more alternatives to GEO going forward. I don’t think it will get back to 24 GEO satellites a year.”

In terms of the smallsat market, Shotwell added, “The micro and small satellite market is all of our future customers. We look at these with the same perspective. There are mini-sats also. I think this will be an important market to serve. We did reduce the cost of our rideshare program (for these types of companies). It demonstrates our commitment to this market.”

Israel said Arianespace has had a very strong tempo of launches this year, but admitted that the market is slowing down a little. Like Shotwell, he does not believe the GEO market will return to the glory days of 20 plus orders a year. He added, “Our calculation on the open market, 11 satellites have already been ordered (this year), so you can say the recovery has started. We consider there is a rebound, but we reckon it will be around 15 satellites a year and not 20 to 25 satellites a year.”

For Arianespace, it had the rare challenge of dealing with an anomaly which happened on a Vega flight in July. Israel said the company was likely to return to flight with Vega in the early part of 2020. He also expects the government/institutional market to be particularly significant for Arianespace. He said, “Europe will have a big institutional demand from 2022 onwards. The U.S. and China are spending a huge amounts on space based capabilities. Europe increasing its level of ambition and this will have an impact.

John Elbon, COO of the United Launch Alliance (ULA), was one of the new executives on the panel. Elbon spoke to the fact that ULA has sold seven flights for its Vulcan rocket, and he that admitted the company has focused on becoming more affordable. Like SpaceX, Elbon admitted that human spaceflight is a “really big deal” and there is a lot of energy going in on making this happen.

One of the most talked about newcomers on the panel was Blue Origin, which is attempting to make a big splash in this area. Deals with the likes of Telesat and Eutelsat certainly hint at strong early progress. Clay Mowry, VP of sales, marketing and customer experience, Blue Origin,  said their system is a work in progress and it will complete its first fairing later this year, and that the big challenge is sourcing materials to build the rocket. However, he said Blue Origin remains on track to launch in 2021, which would change the dynamics of the market.

Kirk Pysher, president, International Launch Services (ILS), made the interesting observation that even with all these launch vehicles, there is not enough vehicles to get these satellites up, if most of the current constellation plans come to fruition. Pysher also spoke enthusiastically of ILS bringing value through dual launch capability for its customers.

Xing He, executive vice president, China Great Wall Industry Corporation (CGWIC), was bullish on the company’s recent performance. With almost 40 launches last year, the launcher has been pretty prolific. He interestingly said that he expects going forward in China, there will be at least five dedicated smallsat launchers from China focused on the domestic market, which indicates a huge potential latent demand for these services.