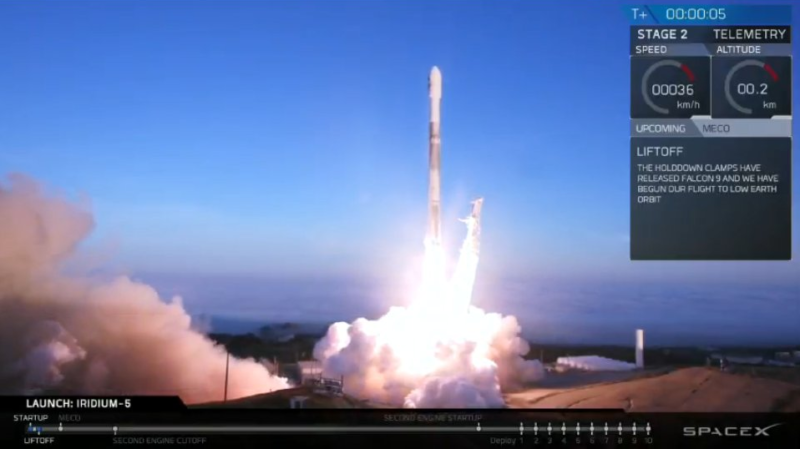 SpaceX’s Falcon 9 lifts off to deliver the fifth set of Iridium Next satellites on March 30, 2018. Photo: SpaceX.

After a brief one day delay, SpaceX successfully launched the fifth set of 10 Iridium Next satellites this morning from the Vandenberg Air Force Base in California. Iridium confirmed shortly after launch that its Network Operations Center (NOC) made contact with all 10 satellites, which are now preparing to begin testing.

Positive update to our satellite and launch delay. Just been apprised there has been a technical resolution; satellites and F9 are in great shape and ready to go! Was ground harness test cable issue – now fixed. Launch now pulled back to Friday, 3/30 at 7:14am pdt! #GoTeam!

Once fully deployed, the Iridium Next constellation will provide global coverage for the company’s Iridium Certus L-band broadband service, as well as Aireon’s global aircraft surveillance and tracking. Just three launches remain in the campaign, which is expected to conclude before the end of 2018. SpaceX will deliver a total of 75 new satellites to orbit, including nine in-orbit spares.

When the Aireon payloads from this launch come online, the system will have nearly global coverage with 15-minute or better update intervals, Aireon stated. This signifies optimal timing for airlines to begin testing the capabilities of space-based Automatic Dependent Surveillance-Broadcast (ADS-B), which will help airlines meet the International Civil Aviation Organization (ICAO) and European Aviation Safety Agency (EASA) regulations that require aircraft be equipped with an aircraft tracking system for those flights not tracked by air traffic control by the end of 2018.

For this launch, SpaceX reused a booster that was previously flown for another Iridium mission last October, making this the second Iridium Next launch to use a flight-proven Falcon 9 rocket.