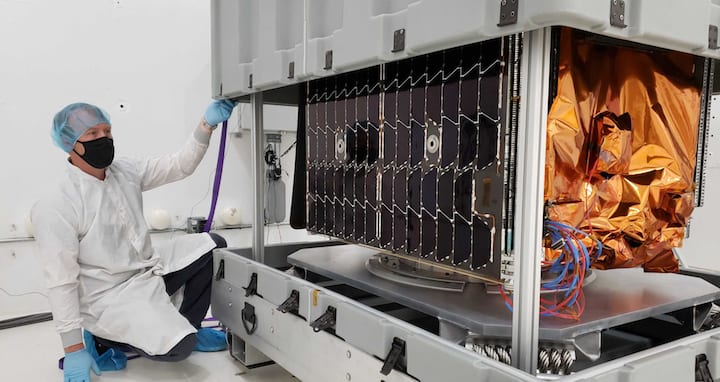 Astranis Space Technologies sees dual-use potential for its MicroGEO satellite platform for both government and military applications. CEO John Gedmark and new Vice President of Government Sales Scott Jacobs discussed that potential in a talk at Space Symposium on April 7.

In March, Astranis was named as a vendor in the U.S. Air Force’s $950 million indefinite-delivery/indefinite-quantity (IDIQ) contract to compete for future efforts for  Joint All Domain Command and Control (JADC2). The contract, announced March 18, deals with capabilities to leverage open systems design, modern software and algorithm development for JADC2. HawkEye 360 was named to this contract as well.

“There’s a lot of what we’re doing on the commercial side that directly translates to some of the needs that we’ve started to see [on the military side],” Gedmark said. “Having small satellites that we can build and launch very quickly or have on orbit ready to go and move those over to provide extra capacity on hotspot or a humanitarian crisis, some kind of disaster relief, that is something we can do with our existing platform. [It may take] some tweaks to software-defined radio, but that’s something we could do very quickly.”

Astranis builds broadband satellites to deploy to Geostationary Orbit (GEO) that are much smaller than typical GEO satellites, hence the name MicroGEO. The first MicroGEO satellite, Arcturus, is set for the upcoming Falcon Heavy launch with Viasat-3 and recently completed final testing. On the commercial side, the company has contracts with Pacific Dataport Inc. (PDI) in Alaska, Anuvu, and Andesat in Peru.

Gedmark said Astranis is ramping up its production line to build MicroGEO satellites quickly, and this can fit into the military’s vision of a hybrid space architecture. Russia’s war in Ukraine has demonstrated the importance of space capabilities, he said.

“This is a democracy that got invaded by an authoritarian regime that knows space and understands space. It became clear very quickly that space is at the front lines of this or any future conflicts,” he said. “One of the first things they did was take down a GEO commercial comsat with a devastating cyber attack. It’s not some theoretical thing that they are going to go after those capabilities — they did it on day one. It made it clear to us that we needed to accelerate and do everything we could to move faster, to try and help.”