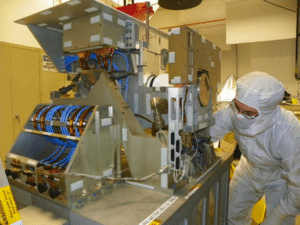 L3Harris Technologies will conduct a second advanced study for NASA that aims to significantly improve the accuracy and timeliness of U.S. weather forecasting, according to the terms of a new contract the organizations announced Thursday.

Slated to begin this month, the study will involve L3Harris testing and evaluating an advanced concept for satellite weather sensors ­– called ‘sounders’ – that measure temperature and water vapor for the U.S. National Oceanic and Atmospheric Administration (NOAA). The L3Harris concept includes a sensor that offers hyperspectral and infrared readings, giving severe weather trackers an advantage as they predict dangerous storms.

L3Harris was previously contracted by NOAA in the spring to run similar analysis supporting a GeoXO satellite imager, which would collect weather, ocean and other environmental data that can be used to assess and improve a range of climate and natural disaster planning efforts. The future geostationary weather sounders and imagers are scheduled to launch in the 2030s.

“To produce accurate forecasts, weather prediction models require detailed observations of the Earth’s surface to the top of the atmosphere. Our technology has and will continue to play a critical role in improving severe storm tracking and warnings by feeding continuous information into advance weather prediction models,” L3Harris President of Space and Airborne Systems Ed Zoiss said in a statement.