On the Case of President Biden’s Missing FCC Chair Nominee 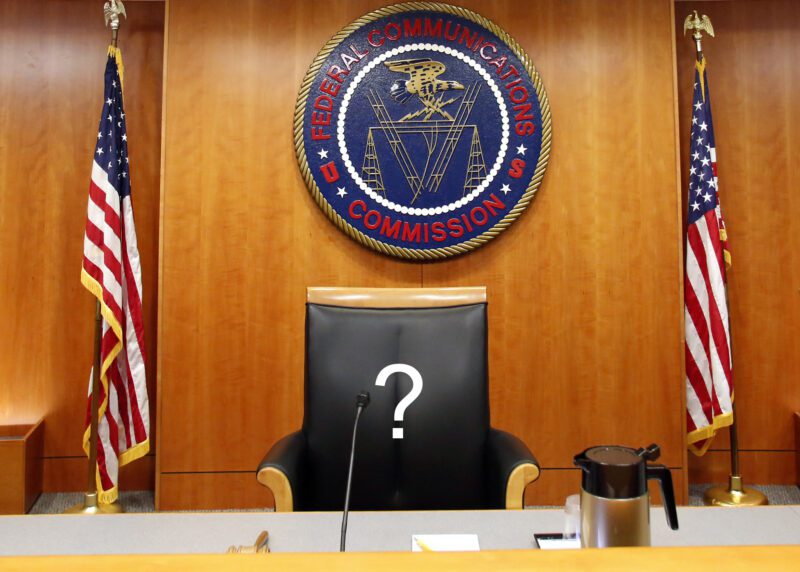 An Empty Chair in the FCC’s hearing room.

There is a remarkable silence in Washington D.C. political circles surrounding a question that nobody expected to be asking in late July — Why hasn’t U.S. President Joe Biden nominated a permanent leader to the Federal Communications Commission (FCC)? What’s the hold-up?

It has been more than six months since President Biden’s inauguration, and even longer since Ajit Pai resigned as the last permanent Chair of one of the nation’s most important rule-making authorities. With major broadband policy decisions, spectrum auctions, a trove of new constellations, and a multitrillion-dollar infrastructure plan in the works, the FCC remains one member short, without a tie-breaking vote from a Senate-confirmed Chair.

To find out why, Via Satellite reached out to more than 60 people and organizations in Washington D.C., including the White House, FCC, legal experts, lobbyists, policy advisors, telecommunications executives, and industry association leaders. A majority of those who responded from the private sector said that they or their organizations are surprised, and at least somewhat concerned, by the lack of progress or new information regarding President Biden’s nominee for FCC Chair.

The FCC declined to comment on this story. Via Satellite made several attempts to reach out to both the White House Press Office and the White House Office of Science and Technology Policy, but neither responded to inquiries.

A former tech policy advisor to the Obama administration, who asked not to be named for this story, told Via Satellite that while they didn’t have any direct knowledge of the White House’s nomination process, it is very possible that the delay is being caused by negotiations over the President’s infrastructure bill.

“The infrastructure plan is taking longer than most people would have liked it to take and talks have been at a crucial stage for some time,” the advisor said. “I wouldn’t be surprised if the Administration was planning on waiting until after they get a bill passed through Congress. They probably don’t want to give Congress anything more to argue about right now. They may be entirely focused on getting a bill signed.”

President Biden himself hasn’t provided much detail in public on his search for a nominee since he named FCC Commissioner Jessica Rosenworcel the FCC’s Acting Chair in January. Rosenworcel’s term technically ended in June 2020, but current rules allowed her to serve through the remainder of the Congressional term. She can serve in her post as Acting Chair until a permanent Chair is named. If Rosenworcel is not put forward as the nominee for Chair, President Biden will have to fill an additional seat to replace her vacancy.

On the whole, the satellite companies that responded to Via Satellite said that they would support Rosenworcel’s nomination as permanent Chair if she were put forward.

Historically speaking, President Biden is way behind schedule in seating his FCC Chair compared to his predecessors. Former President Donald Trump nominated his permanent FCC Chair Ajit Pai within days of taking office. Pai was a Commissioner at the time. Former President Obama put forward his nomination for the FCC Chair, Julius Genachowski, in March 2009 and it took until the end of June 2009 before he was confirmed by the U.S. Senate. President George W. Bush had three new Commissioners, including a Chair, appointed to the FCC by this time in his first term.

Though it was obvious that the Biden Administration would be busy managing the COVID crisis and the resulting economic recovery plan early in his term, many believed that the President would move quickly on a new FCC Chair. During his 2020 election campaign, President Biden repeatedly stated that he would reverse a majority of FCC Chair Ajit Pai’s significant broadband and net neutrality decisions during the previous term.

With a bitterly divided, 50-50 split in the U.S. Senate, confirmation on any nominee will be slower than usual. It is entirely possible that President Biden may not be able to get his FCC Chair into place until the very end of the year, or even early next year — regardless of how soon he puts the nominee forward.

Satellite Industry Association (SIA) President Tom Stroup represents the commercial satellite’s interests in policy and regulatory discussions with the FCC. He declined to speculate on what’s causing the delay, but told Via Satellite that “SIA joins the other telecommunications and broadcast industry organizations in urging the Commission to identify the nominee as soon as possible.”

The GPS Innovation Alliance, which represents Global Positioning service providers to industry and government, seconds SIA’s message to the Administration to put forward an FCC Chair nominee, as well as a nominee to lead the National Telecommunications and Information Administration (NTIA), which also remains without a permanent Administrator.

“We certainly would urge the Biden Administration to expeditiously put forward nominations, including for NTIA Administrator, and to see the U.S. Senate confirm them,” said GPS Innovation Alliance Executive Director J. David Grossman.

President Obama’s Former FCC Chair Tom Wheeler, now a Visiting Fellow at Brookings, wrote a column in late March urging President Biden to move swiftly in putting forward his own FCC nominees. Wheeler emphasized that more than 80 percent of the U.S. economy is affected by its regulatory oversight of networks and outlined the critical and impactful economic decisions that the FCC will have to make regarding mid-band satellite spectrum and 5G.

“There is a seemingly endless list of issues that will confront the Biden FCC: scourge of robocalls, understanding market behaviors including the pricing of services, enforcing existing rules, facilitating the 5G rollout, overseeing television and radio broadcasting, advancing satellite communications, and cooperating with other nations, to mention only a few,” Wheeler wrote in the column. “Until President Biden appoints—and the Senate confirms—a third commissioner, the agency will be deadlocked at 2-2. Absent a majority, there will be no substantial policy decisions on matters such as cybersecurity, net neutrality, broadband program reform, and privacy.”

Wheeler was not able to provide Via Satellite with any additional comment beyond his column.

Under Rosenworcel’s temporary leadership, the FCC has been able to find compromise where possible and make decisions. Some of those decisions even came with benefits to U.S. satellite broadband service providers. In March, the FCC’s approved the Emergency Broadband Benefit Program. – a federally funded discount program designed to assist eligible households in acquiring internet connectivity during the pandemic.

Stroup and the SIA applauded the decision. “Over the past year, the need to work from home and access online schooling during the pandemic has demonstrated the critical importance that all Americans have access to affordable and reliable connectivity,” Stroup wrote in a statement. “The Emergency Broadband Benefit Program will help ensure Americans have access to high quality terrestrial and satellite-based internet services and we strongly applaud FCC Acting Chairwoman Jessica Rosenworcel and the Commission for approving this Program.”

When in transition, the FCC traditionally avoids making decisions that will make headlines and interfere with the nomination of any potential incoming Chair and any future industry relations. Rosenworcel’s Commission, however, did create some friction with certain satellite operators with a decision it made in April to allow SpaceX to lower the altitude of its future Starlink Low-Earth Orbit (LEO) constellation satellites. The decision drew objections from Viasat, Amazon, SES, and other satellite competitors.

Viasat requested that the FCC prepare an environmental impact statement on Starlink. When it was denied that request, Viasat told the FCC that it would file for a stay from the U.S. Court of Appeals for the District of Columbia Circuit if it did not reconsider its decision by June 1. Viasat followed through on its threat, but was ultimately denied a stay. The court is still considering Viasat’s NEPA arguments on the merits.

“We believe the decision will not impact the Court’s ultimate ruling, and we remain optimistic the Court will conclude that the FCC violated federal law by failing to analyze the environmental impacts of this historically unprecedented deployment of satellites into already crowded portions of space,” Viasat said in a company statement.

It also remains to be seen if the FCC can continue to find compromise over spectrum issues in its current state. Former Chairman Pai’s transition plan to 5G involved a dramatic shift in mid-band spectrum resources and a controversial, near-traumatic spectrum auction for satellite operators. The FCC began the assignment phase of the 5G C-band auction in February.

Rosenworcel voiced tepid opposition to Pai’s handling of spectrum payouts to Intelsat, SES, and the now-defunct C-band Alliance, while also supporting the use of mid-band spectrum to bridge the digital divide in the United States. The FCC has a 3.45-3.55 GHz band 5G spectrum auction scheduled to begin in early October of this year.

Space and spectrum issues aside, the United States finds itself on the receiving end of a series of recent cyberattacks targeted at critical industries. What initially looked like bipartisan agreement on an infrastructure bill and massive U.S. broadband roll-out plan has deteriorated into political posturing. Considering the political weight and scale of these issues and challenges, the Biden Administration would most certainly rest a little easier if it knew it could count on FCC and NTIA leadership to push its policies forward with a tie-breaking vote on tough decisions.