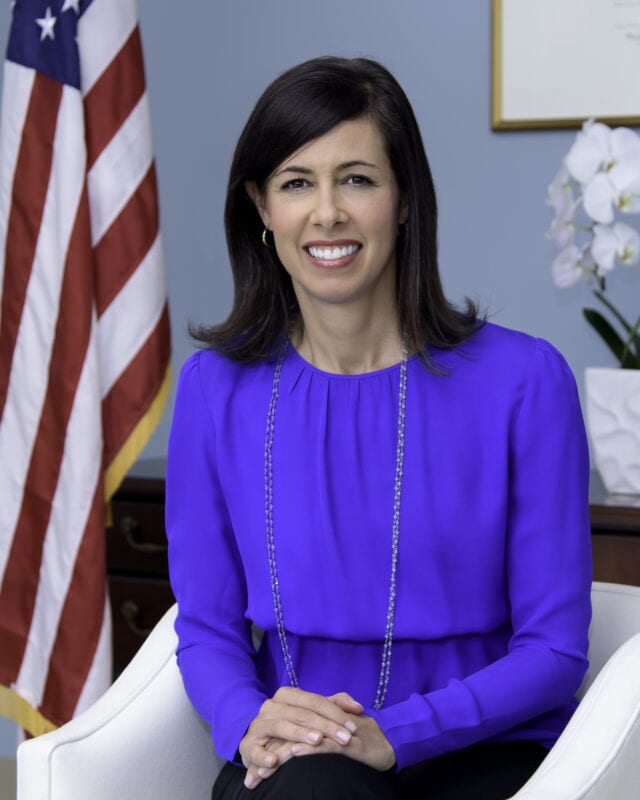 Editor’s Note: This story was updated on Friday, Jan. 22.

U.S. President Joe Biden named Jessica Rosenworcel acting chairwoman of the FCC on Thursday. She succeeds Ajit Pai, who stepped down on Jan. 20 at the end of President Trump’s term. Biden has not yet named a nominee for FCC chair.

Rosenworcel has been an FCC commissioner since 2012. She was appointed by President Obama for a Democratic position on the FCC in October 2011 and confirmed in May 2012, and later confirmed by the Senate for an additional term in August 2017.

“I am honored to be designated as the acting chairwoman of the Federal Communications Commission by President Biden,” Rosenworcel said in a Thursday statement. “I thank the president for the opportunity to lead an agency with such a vital mission and talented staff.  It is a privilege to serve the American people and work on their behalf to expand the reach of communications opportunity in the digital age.”

In her time on the FCC, Rosenworcel has worked to protect net neutrality and to support wireless services like Wi-Fi and the Internet of Things (IoT). She has been a firm proponent of bringing broadband to all Americans and has criticized the FCC for not doing enough to bridge the digital divide in both rural and urban areas.

In a statement in October 2020, for example, on the FCC establishing a 5G fund for rural America, Rosenworcel called attention to the fact that many households outside of rural areas lack access to broadband.

“Three to four times as many households outside of rural areas have no broadband at home. But we have no new initiatives, no new funding proposals, no new policies to address the millions of children locked out of the virtual classroom. This cruel pandemic has revealed the hard truth that our nation’s digital divide is very real and very big. It’s time for a greater sense of urgency in every way to fix it,” Rosenworcel said in the statement.

Rosenworcel also voted against the FCC’s move for a public auction to repurpose the C-band, and was a vocal opponent of the decision. At the time, she questioned the commission’s legal authority to mandate accelerated relocation payments to satellite operators, and said any payments should be voluntarily negotiated between the parties. She called the $9.7 billion-number in relocation payments an “effort to justify backroom deals.”

“If we accept the FCC’s argument here, it is hard to imagine any limitation on the agency’s ability to require payments for any purpose that even loosely can be connected to some spectrum-related goal as a condition of auction participation, and that simply cannot be true,” Rosenworcel said during an FCC meeting on Feb. 28, 2019.

Pai congratulated Rosenworcel in a tweet: “While we did not always agree on policy matters, I always valued our shared commitment to public service. Serving the American people is a tremendous honor and I wish her the best in the future.”

Industry groups, including the Satellite Industry Association, issued statements in support. SIA highlighted Rosenworcel’s commitment to bridging the digital divide: “Acting Chairwoman Rosenworcel is a leading advocate for bridging the digital divide and providing affordable, accessible connectivity to all Americans. SIA and its members look forward to continuing to work with her and the entire commission to extend the availability of satellite services, which are playing an increasingly vital role during the COVID- 19 pandemic,” President Tom Stroup said.

The GPS Innovation Alliance also congratulated the new chair: “The wealth of experience from her time spent as a commissioner and congressional staffer will enhance her leadership of the agency. We look forward to working with the chairwoman and her colleagues in support of policies that promote, protect and enhance GPS,” GPSIA executive director J. David Grossman said.

The Telecommunications Industry Association emphasized policy areas of importance: “TIA … looks forward to working on a number of important issues including closing the homework gap, spectrum access, securing and building trust in our networks, and creating space for industry innovation,” TIA CEO, David Stehlin said. “It’s a pivotal time for information and communication technology, and we must work together to ensure a safe and secure path forward for our nation’s digital infrastructure.”