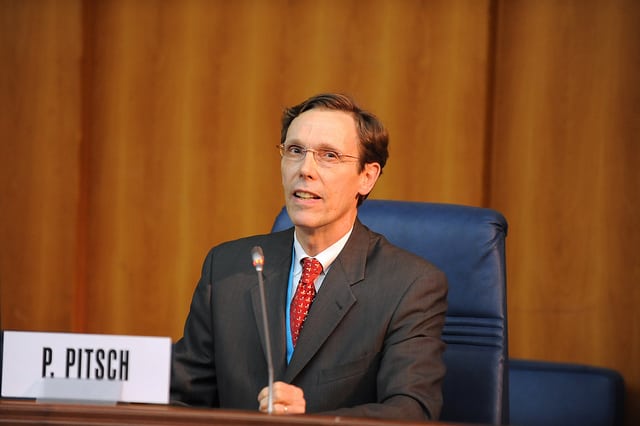 The C-Band Alliance (CBA) appointed Peter Pitsch as head of advocacy and government affairs. The CBA is the entity that proposes to implement a safe and efficient clearing and repurposing of mid-band ‘C-band’ downlink spectrum to accelerate the deployment of 5G services in the U.S. The CBA was formed by Intelsat, SES, Eutelsat, and Telesat, the band’s incumbents and continental U.S. satellite services operators.

Pitsch previously served as associate general counsel for Intel, where he was responsible for global telecommunications policy, a position from which he retired in 2018. Since October 2017, Mr. Pitsch advocated in support of the CBA’s market-based proposal on behalf of Intel. Pitsch has over three decades of experience advocating for public policy issues in front of the Federal Communications Commission “FCC) and U.S. Congress. Positions of note prior to his career at Intel included serving as chief of the office of plans and policy and chief of staff to the Chairman of the FCC during the Reagan Administration.

“The appointment of Peter Pitsch, who is already well-versed in this complex proceeding at the FCC, allows the CBA to further amplify its advocacy efforts at the FCC and on Capitol Hill as we explain how our proposal best balances the needs of C-band incumbents with the need for speed when it comes to supplying spectrum for 5G in the United States,” said C-Band Alliance Chief Executive Officer (CEO) Bill Tolpegin. “Given his long experience with telecom policy and intimate knowledge of our proposal and the FCC proceeding, we are confident Peter will be a valuable leader in our efforts to build consensus on our proposal.”