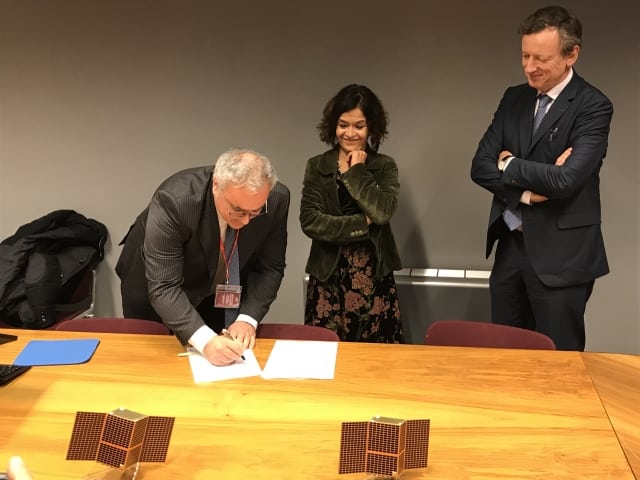 Sitael and the Italian Space Agency (ASI) have signed the prime contract for the Platino program, which aims to develop a new generation of multi-purpose 200kg small satellites for multi-mission applications.

For this program, Sitael has built up an industrial team that includes Thales Alenia Space, Space Engineering and Leonardo.

According to Sitael, Platino is an all-electric mini-platform suitable for a wide range of missions (hi-res optical, mini-SAR, telecom, etc.), deployable in constellation.

“The contract for the creation of Platino will provide our country with several new technologies that can be used extensively on other segments of satellite systems developed by the European industry,” said ASI General Director Anna Sirica.

“By signing this contract we have settled the foundations of the development for a competitive asset on the international market, by developing production skills for high-tech mini-satellites based on components designed and manufactured in Italy at industrial level. With the Platino program, ASI enters the satellite segment that today is growing worldwide, enabling a wide range of missions, from telecommunications, to Earth Observation (EO) and scientific missions, which are characterized by low cost, an extremely competitive time to market and a natural propensity to develop satellite constellations, the great challenge of the next years in space,” said ASI President Roberto Battiston.