DARPA, Boeing Spaceplane Would Be ‘Roughly the Size of a Business Jet’ 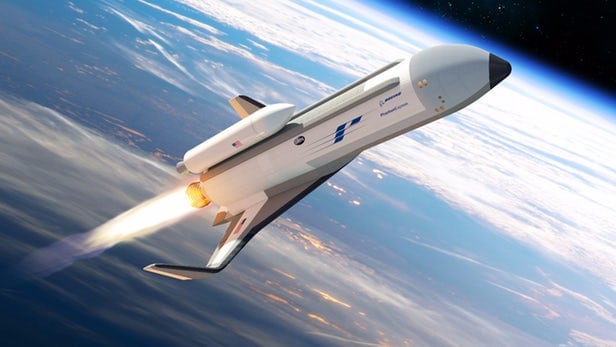 What do you get when you mix a business jet with a spaceship? Presumably, it would result in Phantom Express, Boeing and the U.S. Defense Advanced Research Project Agency’s (DARPA) aircraft-like vehicle. DARPA selected Boeing to complete advanced design work, and investment is coming from both parties.

The United States is looking to develop low-cost, fast, reusable, and autonomous capability to deploy small satellites into Low Earth Orbit (LEO). The Experimental Spaceplane program, XS-1, looks to do just that. If successful, the program would result in an entirely new class of hypersonic aircraft.

DARPA said it envisions a vehicle that is roughly the size of a business jet. It would be able to take off vertically like a rocket, and land horizontally like a business jet. Phantom Express would use no external boosters at launch, and would be powered only by self-contained cryogenic propellants. After completing its mission, the vehicle would ideally be ready to take flight again in a matter of hours.

There are still technological capabilities and ground operations that need to advance for Phantom Express to become operational (modern launches to LEO take months, even years, of preparation — just for a single satellite). But the motivation to start work, DARPA said, is that this kind of capability “would revolutionize the nation’s ability to recover from a catastrophic loss of military or commercial satellites, upon which the nation today is critically dependent.”

“The XS-1 would be neither a traditional airplane nor a conventional launch vehicle but rather a combination of the two, with the goal of lowering launch costs by a factor of ten and replacing today’s frustratingly long wait time with launch on demand,” said Jess Sponable, DARPA program manager. “We’re very pleased with Boeing’s progress on the XS-1 through Phase 1 of the program and look forward to continuing our close collaboration in this newly funded progression to Phases 2 and 3: fabrication and flight.”

During the next phases of the program, Boeing and DARPA plan to integrate technologies into the design including: Aerojet Rocketdyne’s AR-22 engine, a version of the legacy Space Shuttle Main Engine (SSME), for the technology demonstrator’s propulsion system; easily accessible subsystem components configured as line replaceable units; lightweight composite cryogenic propellant tanks to hold liquid oxygen and liquid hydrogen propellants; hybrid composite-metallic wings and control surfaces able to withstand the physical stresses of suborbital hypersonic flight and temperatures of more than 2,000 degrees Fahrenheit; and automated flight-termination and other technologies for autonomous flight and operations, including some developed by DARPA’s Airborne Launch Assist Space Access (ALASA) program.

The design incorporates technologies that have already been developed by DARPA, NASA and the U.S. Air Force. Design, construction and testing of the technology demonstration vehicle is in XS-1 Phase 2, which will take place through 2019. That includes initially firing Phantom Express’s engine on the ground 10 times in 10 days to demonstrate propulsion readiness for flight tests, DARPA said. Phase 3 objectives include 12 to 15 flight tests, currently scheduled for 2020. The vehicle would aim to fly 10 times over 10 consecutive days, at first without payloads and at speeds as fast as Mach 5. Future flights are planned to move as fast as Mach 10, and deliver a demonstration payload between 900 pounds and 3,000 pounds into LEO.

“If successful, the program could help enable a commercial service in the future that could operate with recurring costs of as little as $5 million or less per launch, including the cost of an expendable upper stage, assuming a recurring flight rate of at least 10 flights per year — a small fraction of the cost of launch systems the U.S. military currently uses for similarly sized payloads,” DARPA said in a statement.

The agency noted that goal is for actual cost, not commercial price, which would be determined in part by market forces.

“Phantom Express is designed to disrupt and transform the satellite launch process as we know it today,” said Darryl Davis, president of Boeing Phantom Works, “creating a new, on-demand space-launch capability that can be achieved more affordably and with less risk.”