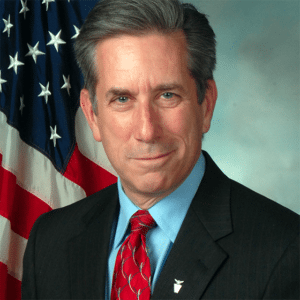 One of the main defense priorities of the new presidential administration is to increase the resiliency of United States space assets against foreign powers, according to speakers at a Washington Space Business Roundtable (WSBR) panel on May 9.

As John Hill, acting deputy assistant secretary of defense for space policy, pointed out, with every new administration comes a new national security strategy. President Trump’s election coincides with the completion of a number of space strategic portfolio reviews by the Department of Defense (DOD), which have generally concluded that the U.S. must bolster its space resilience in the face of emerging multi-domain warfare.

“Our fundamental challenge is we have to deal with space as an increasingly contested place,” said Principal DOD Space Advisor (PDSA) David Hardy. “How do we adjust to a time in which we have adversaries who appear to be determined to put at risk our space capabilities?”

One way, he suggested, is to find new ways to take advantage of the sudden growth of the space commercial sector. “My own opinion is that a crowded space is good for national defense,” Hardy said.

Hill agreed, and noted it is also important to leverage the assets of the U.S.’ allies overseas. “When you look at diversification as a resiliency approach, you have to take advantage of what other things people are putting in space already — commercial operators and allies,” he said.

Bradford Tousley, director of the Tactical Technology Office (TTO) at the Defense Advanced Research Projects Agency (DARPA), highlighted two programs that have tapped the commercial sector for support: the Experimental Spaceplane (XS 1) and the Robotic Servicing of Geosynchronous Satellites (RSGS).

Despite a pending lawsuit from Orbital ATK, DARPA intends to develop RSGS alongside manufacturer Space Systems Loral (SSL), with both parties sharing costs and responsibilities. Tousley also stated that DARPA is almost ready to announce a similar partnership with a yet unnamed company for Phases 2 and 3 of the XS 1 program.

“The U.S. industrial base is incredibly robust. We think that is a huge enabler to resilience,” Tousley said. “We’re interested in leveraging that capability.”

The panelists agreed that it is prudent for the U.S. government to more fully integrate operations across all of the warfighting domains: land, sea, air and space. Chirag Parikh, deputy director of counterproliferation at the National Geospatial Intelligence Agency, also believes the military can use history to inform its decision-making in space. “One thing that we can do is look at what were the issues of terrestrial, or sea-based or airborne conflict,” he said. “We need to start looking backwards at how we ended up developing these types of norms and behaviors.”

Parikh also noted that improving mission assurance is a timely issue, as the United States has become more dependent on its space assets than ever before. “That level of change has been noticed not only by those who use it but also by potential adversaries. The environment has changed because we now use space for so many different things. It isn’t because we want to throw everything in a single bucket. It’s because it’s the most economic form of point and multi-point communication,” Parikh said. “If you try to replicate what space does in a terrestrial layer, it would be cost prohibitive.”

Many questions remain unanswered when it comes to the government’s full year 2018 budget. Once it is confirmed, the panelists said the industry will have a better picture of how the U.S. will progress from both a civil and commercial perspective. “I think what you’ll see in the budget is measured steps across the enterprise in terms of how we address mission assurance,” Hardy said.

However, Parikh cautioned against searching for the “line item” on resiliency in the official budget, as new mission assurance efforts for space assets will be subtle and incremental. “As people look into the full-year 2018 budget, you need to consider this from a broader aperture. Resiliency isn’t just one thing,” he said. “It’s the whole government’s perspective.”