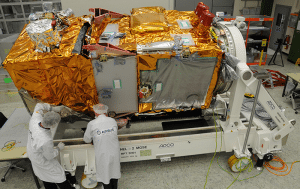 [Via Satellite 01-26-2015] Airbus Defence and Space has signed a contract worth around 285 million euros with the European Space Agency (ESA) to deliver two further optical satellites for the European Copernicus program. As part of the Sentinel 2 Earth Observation (EO) satellite system, these two new models, called Sentinel 2C and Sentinel 2D, will observe the environment and land surfaces and continue from 2021 with the measurements carried out by the first two flight units as part of the European Copernicus program. As prime contractor, Airbus Defence and Space will lead an industrial consortium of more than 50 companies from 17 European countries and the United States.

The Sentinel 2 satellites deliver optical images from a height of 786 km with a resolution of 10, 20 and 60 meters at an image width of 290 km. These images are produced in 13 spectral bands, from the visible to the short-wave infrared range of the electromagnetic spectrum.