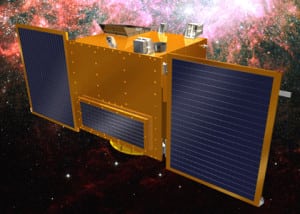 [Via Satellite 01-05-2015] The Korean Ministry of Science, ICT and Future Planning announced that the nation’s satellite avoided collision with a space object, reversing its previous expectations from Saturday, according to Korea Times. Korea Times reported that the Korean science ministry said earlier on Saturday that the space object, part of the debris created during a crash between telecom satellites of the United States and Russia in Feb. 2009, would approach Korea’s Science and Technology Satellite (STSAT) 3 and would likely collide with it.

“The space object had been expected to approach within 23 meters of our satellite over the Greenland Sea around 9:31 p.m. on Sunday (KST). But the United States Joint Space Operation Center updated us that the expected distance of the object has left the danger range. Korea Aerospace Research Institute also analyzed orbital data and now expect the distance to be more than 1 kilometer,” the ministry said in a statement. “It has been determined that the Science and Technology Satellite 3 and the space object are not likely to collide.”