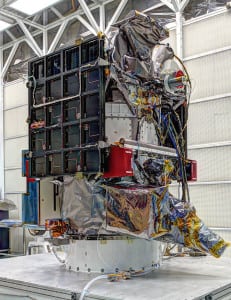 [Via Satellite 12-22-2014] NASA, the United States Air Force and the National Oceanographic and Atmospheric Administration (NOAA) have joined forces to revive the Triana satellite, renamed the Deep Space Climate Observatory (DSCOVR), for a five year space weather mission. First planned in the late 1990s, the mission was cancelled and put into storage in 2001. Seven years later, NASA took the satellite back out of storage and after live-ness testing, confirmed that it was still capable of meeting the mission requirements of NOAA and the U.S. Air Force.

NOAA is the mission lead for the DSCOVR mission, having developed space weather data processing and archiving capabilities. The agency provided funds to refurbish the spacecraft and space weather sensors, develop a control system and provide technical management of the space segment. NASA conducted the restoration, funded the refurbishment of the satellite’s Earth science instruments, and will support their data processing and analysis. The Air Force is providing launch services through a contract with SpaceX.

DSCOVR’s launch is currently scheduled for Jan. 23, 2015 aboard a Falcon 9 rocket. After a 110-day trip to Lagrange point 1 (L1), approximately 1 million miles from Earth, DSCOVR will replace NASA’s Advanced Composition Explorer (ACE), which has been functioning in orbit since 1997. Once the mission begins, ACE will shift into a backup role.

“While ACE is still performing admirably, and providing reliable data, it is long past its design life and getting DSCOVR on orbit before any issues arise with ACE is NOAA’s primary objective. This will ensure the U.S. will have uninterrupted ability to monitor and forecast space weather conditions,” Doug Whiteley, deputy director, office of systems development at NOAA’s Satellite and Information Service said on a Dec. 18 teleconference.

Solar activity can interfere with and potentially damage satellite systems. High-speed solar winds and Coronal Mass Ejections (CMEs) can send large numbers of charged particles Earth-bound, affecting Global Navigation Satellite Systems (GNSS), satellite subsystems and other space technologies as well as ground infrastructure for other industries. DSCOVR has a five-year mission to monitor space weather and provide warnings to industries of impending geomagnetic storms with greater consistency than its predecessor.

“One advantage we get from DSCOVR is, ACE as a research satellite was never designed to function during all possible types of events and in fact failed to deliver some of its key data during about 25 percent of all of the most severe storms of the last solar cycle,” said Douglas Biesecker, DSCOVR program scientist at NOAA’s Space Weather Prediction Center. “But DSCOVR was built differently and will operate during these severe and extreme storms, giving us better data.”

NASA has two Earth science instruments aboard DSCOVR: the National Institute of Standards and Technology Advanced Radiometer (NISTAR) and the Earth Polychromatic Imaging Camera (EPIC). NISTAR measures the whole absolute irradiance integrated over the sunlit face of Earth for climate science applications, while EPIC captures images of the sunlit side of Earth in 10 narrowband channels for measuring ozone and aerosol distributions, cloud height, vegetation properties and the ultra-violet reflectivity.

“The L1 vantage point of Earth, in which we can observe the entire sun-facing side of Earth and all in one view, will essentially eliminate the sampling issues encountered by other low Earth orbiting satellites that are measuring the radiation budget. DSCOVR can be used as an independent Earth radiation budget-monitoring platform to complement the existing missions. The goal here is to develop a system to provide a global daytime radiation budget accurate to less than 1.5 percent,” said Richard Eckman, a DSCOVR program scientist at NASA.

DSCOVR brings a number of firsts for NOAA. Originally the primary mission was Earth science, but now it is operational forecasting, making the spacecraft the agency’s first primary space weather mission once operational. It is also the agency’s first mission beyond Geostationary Earth Orbit (GEO) and its first launch with SpaceX.

Whiteley said if the satellite does not launch on the 23rd, SpaceX has two more consecutive days to remain on the launch pad before a later launch window is required. DSCOVR costs approximately $340 million to build, restore and launch, he said. Refurbishing the 750-kg satellite included replacing the batteries, relocating the magnetometer and moving an instrument to the spacecraft bus. Engineers began refurbishing and reintegrating the satellite in 2012.

Data from DSCOVR and a new forecast model coming online in fall 2015 will enable forecasters to predict regional geomagnetic storming. Biesecker said NOAA has more than 44,000 individuals and organizations registered to receive space weather forecasts by email. This number has been climbing since the sun is at the peak of its 11-year solar cycle.