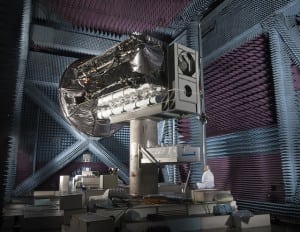 The MUOS 2 satellite. Lockheed Martin is the prime contractor for MUOS.

[Via Satellite 12-02-2014] Lockheed Martin has finished thermal vacuum testing on the United States Navy’s fourth Mobile User Objective System satellite (MUOS 4). The next step is Final Integrated System Testing, ahead of launch in the second half of 2015. Once MUOS 4 is in orbit, the constellation will reach operational status providing global coverage for secure voice and data.

Lockheed Martin shipped the MUOS 3 satellite to Cape Canaveral Air Force Station in Florida on Nov. 5 for launch in January. The company is on contract to deliver five MOUS satellites. The final spacecraft is expected to launch in 2016.