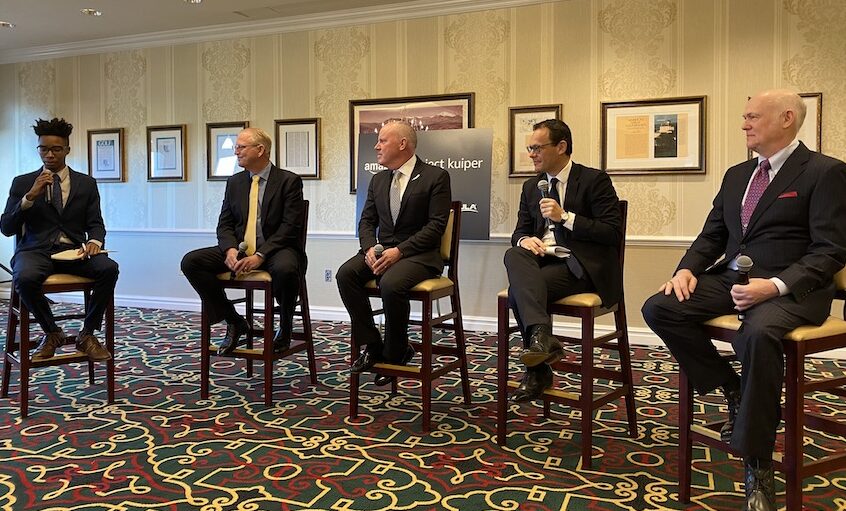 COLORADO SPRINGS – Amazon ramped up its plans for its Kuiper constellation by signing a multi-launch deal on Tuesday with a large swath of the heavy lift launch industry. The company contracted United Launch Alliance (ULA), Arianespace, and Blue Origin to provide a combined 83 launches to send the majority of Amazon’s planned 3,236 Kuiper satellites into space.

This includes 38 launches on ULA’s Vulcan Centaur rocket, 18 on Arianespace’s Ariane 6, and 12 launches on Blue Origin’s New Glenn, with options for 15 additional launches. Amazon said this is the largest commercial procurement of space launch services in history.

The deal is in addition to previously announced agreements for nine launches on ULA Atlas V vehicles, as well as two RS1 launches from ABL Space Systems to deploy the prototype KuiperSat-1 and KuiperSat-2 satellites. Amazon plans to launch the prototype satellites later this year.

Limp described Amazon’s consumer terminal as about the size of an LP record, and said the cost to manufacture is “well under $500” due, in part, to advancements on TX/RX receive and transmit hardware and greater performance on custom silicon designed in-house at Amazon.

Limp said that manufacturing costs can be further reduced and that Amazon’s expertise in building products will be key to its success. He projected that Amazon will have to build between two to four Kuiper satellites per day, and tens of millions of customer terminals.

“There are also going to be tens of millions — assuming we’re successful — of customer terminals. These are very complicated solid-state arrays that very few people have built at scale,” Limp said. “I’m proud and lucky to have an organization that ships tens of millions of things. We are going to bring that expertise to [manufacturing this project]. That is the thing that Amazon has the muscle on, and in my experience, has been the toughest problem scaling these types of things.”

Limp would not go into specifics on how much the terminal will cost for consumers, but said the small size drives the cost down, paired with Amazon’s current large-scale capabilities with routers. He also confirmed the Project Kuiper team is also working on enterprise terminals for different use cases, but did not share further details.

Arianespace CEO Stephane Israel said the launcher has been working with Blue Origin on this launch contract for two years. “What we did with Amazon is absolutely a game-changer for us,” Israel said.

Arianespace’s upcoming next-generation rocket, the Ariane 6, is designed to carry 24 tons to Low-Earth Orbit (LEO). A planned upgraded version of Ariane 6 will be able to carry between 35 to 40 Kuiper satellites to orbit. Israel said Arianespace is confident that Ariane 6 will launch before the end of the year.

ULA CEO Tory Bruno said the upcoming Vulcan Centaur rocket will also fly by the end of this year. Each Vulcan launch under this contract will be able to carry about 45 Kuiper satellites.

Bruno spoke to the importance of this large-scale constellation and the work it will require across the entire industry, saying it will lead to increases in facilities and production capability at ULA and industry partners Beyond Gravity (formerly RUAG Space), Aerojet Rocketdyne, Blue Origin, and Northrop Grumman.

“We are going to essentially be doubling America’s launch industrial base. These additional launches will take [ULA] to about twice our flight rate, which means about twice our infrastructure,” Bruno said. “This is a big impact for our country, and for our Western alliances to be able to keep up with this truly amazing constellation. We’re pretty excited about what it means for the launch industry.”

Amazon is facing an FCC deadline to have half of its constellation launched by July 2026. Limp, however, said that fulfilling the demand for broadband is Amazon’s “most urgent deadline.”

“I think that the world needs more than one constellation,” he said. “There’s an insatiable need for broadband across so many different use cases, consumer, enterprise, and government. Our ability to get that out and satisfy that need on behalf of customers as quickly as possible is what gets me up every morning.”