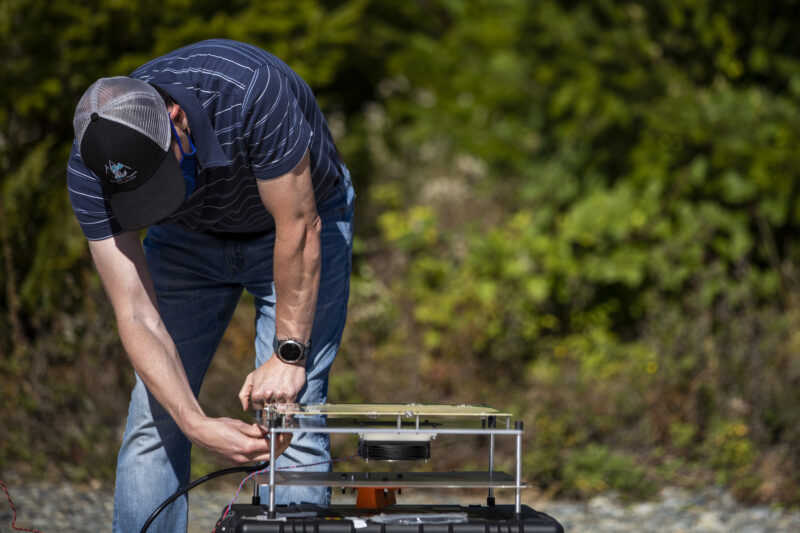 Amazon has completed initial development of the user terminal for Project Kuiper, it’s Low-Earth Orbit (LEO) satellite constellation in development. Amazon announced Wednesday that its prototype design has delivered speeds up to 400 Mbps and streamed 4K-quality video in tests with a Geostationary (GEO) satellite. The antenna design and manufacturing effort is led in-house by Amazon.

Amazon said the single aperture phased array antenna measures 12 inches in diameter, and the reduction in size compared to legacy antenna designs will allow the company to reduce production costs and give customers an affordable terminal. Amazon declined to provide the cost of the terminal for the average user.

Nima Mahanfar, senior manager of hardware and antenna development for Project Kuiper said in an Amazon Q&A published Wednesday that the key advancement in the antenna was combining transmit and receive phased-array antennas into one aperture by using tiny antenna element structures to overlay one over the other. Mahanfar said this has never been done before with the Ku-band because the frequencies are far apart.

“Our design involves hundreds of antennas in each aperture, with receive antennas operating at 18 to 20 GHz and transmit antennas operating at 28 to 30 GHz. Our breakthrough came from the realization that we could get to a single lattice by looking at each antenna element uniquely – helping reduce the size and cost of our entire terminal,” Mahanfar said. 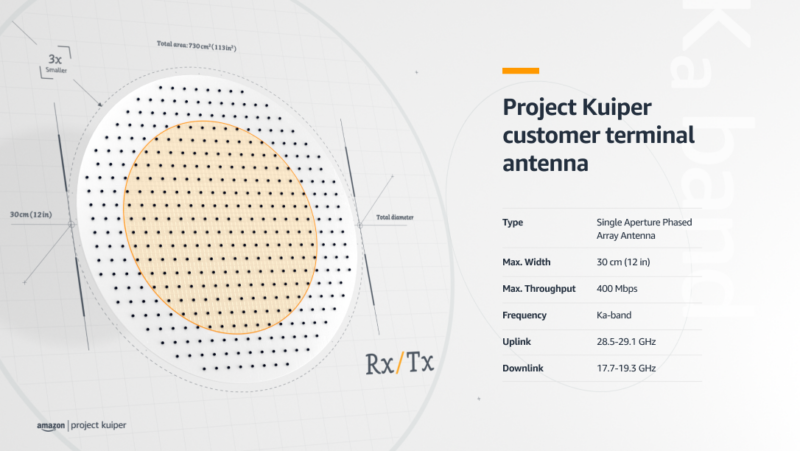 Mahanfar said in the Q&A that Amazon wanted to ensure the antenna could be mass produced by mainstream circuit board manufacturers and thus kept the design as simple as possible.

By comparison, the phased array for Starlink, SpaceX’s LEO constellation, is 19 inches in diameter and costs $499. Like Amazon, SpaceX has built the Starlink terminal in-house.

“If you want to make a difference for unserved and underserved communities, you need to deliver service at a price that makes sense for customers,” said Rajeev Badyal, VP of Technology for Project Kuiper at Amazon. “This simple fact inspired one of our key tenets for Kuiper: to invent a light, compact phased array antenna that would allow us to produce an affordable customer terminal. It’s incredible to see such a small form factor delivering this type of speed and performance.”

Amazon’s antenna unveiling comes after the FCC approved its plans for a 3,236 satellite Project Kuiper system in July. According to the FCC order, Amazon is required to launch and operate 50% of its satellites no later than July 30, 2026, and Kuiper must launch and operate the remaining satelites no later than July 30, 2029. Service will begin once the first 578 satellites are launched. Amazon invested $10 billion into the project at the time of FCC approval.

Amazon declined to provide more specifics on its timeline for Project Kuiper on Wednesday.