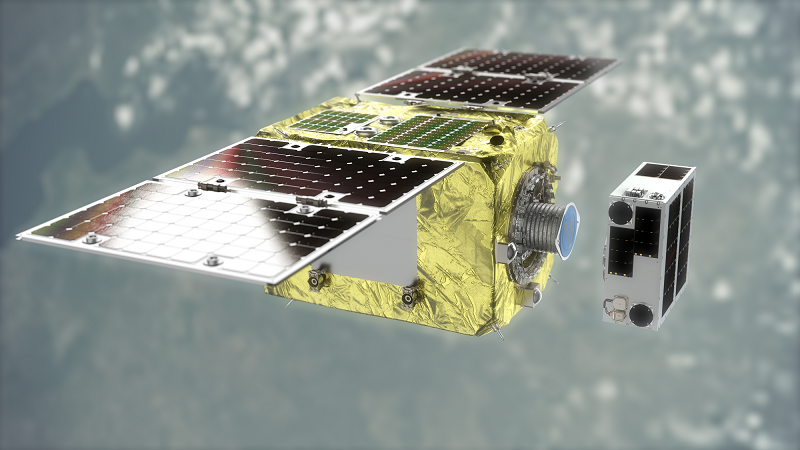 Astroscale announced Wednesday that its End-of-Life Services by Astroscale-demonstration (ELSA-d) mission completed a controlled close-approach rendezvous operations between its two spacecraft in orbit, despite thruster issues.

The ELSA-d mission, which last year successfully demonstrated capturing a client spacecraft, hit a roadblock in January. In the May 4 update, Astroscale explained that four of the spacecraft’s eight thrusters failed. A system issue impacted three of the thrusters, but the root cause for fourth is unknown. Astroscale paused the mission for a time before moving forward.

The thruster issues created a challenge to replan the close approach rendezvous. Astroscale said that on April 7, the servicer spacecraft maneuvered to 159 meters from the client, and successfully searched and detected the client satellite.

This enabled “a transition from absolute navigation, which relies on GPS and ground-based observations, to relative navigation, using on-board sensors. This handover has been the most challenging operation of the ELSA-d mission so far and is widely recognized as one of the more difficult capabilities to prove for satellite servicing operations,” Astroscale said.

“The journey to reunite the servicer and client, along with the successful completion of switching from absolute to relative navigation, have allowed us to prove even more key technologies and operational capabilities required for commercial end-of-life debris removal services,” said Seita Iizuka, ELSA-d Project Manager. “Proving these capabilities gives us, and our partners, greater confidence in our debris removal service developments, and I congratulate the team on this impressive achievement.”

The mission has not yet been able to complete autonomous capture demonstration. At this point, Astroscale has maneuvered the servicer away from the client and the team will evaluate the next phase of the mission and if a safe magnetic recapture can be performed.

“ELSA-d was never going to be easy, even under ideal circumstances, but our global team has overcome numerous challenges and had tremendous successes, which will accelerate the already rapid growth of the on-orbit servicing market,” said Nobu Okada, Founder and CEO of Astroscale.