SpaceX, Telesat Forecast 90% of IFC Service in 10 Years Will Be LEO 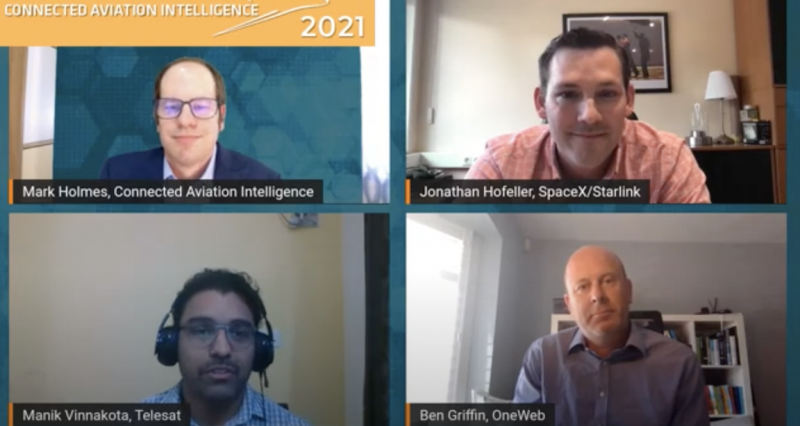 SpaceX, OneWeb, and Telesat executives agree that in 10 years, most aviation connectivity will come through satellites in Low-Earth Orbit — a major shift from the primarily Geostationary (GEO) service of today.

Jonathan Hofeller, vice president of Starlink Commercial Sales for SpaceX was bullish, forecasting that 90% or more of In-Flight Connectivity (IFC) service will come from LEO in the next decade

“Passengers and customers want a great experience that GEO systems simply cannot provide. It’s going to be up to the individual airline whether they want to be responsive to that — or if they there are OK with having a system that is not as responsive to their customers’ demands,” Hofeller said Wednesday, speaking virtually at the Connected Aviation Intelligence Summit.

Both OneWeb and Telesat with Lightspeed have made clear that aviation is a target market for their LEO constellation, and lately SpaceX has been making a statement of intent as well. The operator has filings with the FCC asking to use a modified version of its consumer antenna on moving platforms, and in a recent interview with Via Satellite, COO Gwynne Shotwell said that Starlink service will be available on airplanes in three years.

While SpaceX is less public about its plans for aviation, Hofeller confirmed that SpaceX has an aviation product in development. He said that SpaceX is in talks with several airlines, has performed some demonstrations, and is working to have a product finalized to be put on aircraft “in the very near future.”

Hofeller said that after consumer broadband, aviation is a major focus for Starlink. “One of the next big groups that require good connectivity is aviation. It seems like a logical step, that this is going to be the next big portion of what we’re trying to get into,” he said.

A number of trends in aviation are driving the need for connectivity that LEO players are hoping to capitalize on. Manik Vinnakota, director of Commercial and Product Development for Telesat, said that as more airline traffic is taking place from the East to the West, polar connectivity becomes more important for those routes. At the same time, consumer internet use requires more uplink capability, and airports will deal with more congestion at airport hubs, which puts demands on bandwidth.

“All of these problems GEO cannot solve,” Vinnakota said. “You can’t do polar, you can only put so much capacity on an airport, you can only upload so much data on a GEO satellite. Because of all these factors, over the next decade, it’ll be predominantly a LEO share of the market.”

Ben Griffin, OneWeb’s vice president of Mobility, was realistic about concerns airlines have about adopting new technology, calling the industry “risk-averse.” He believes there will be an acceleration in uptake once LEO has established a level of credibility for airlines. But OneWeb doesn’t expect an instant switchover, where airlines instantly discontinue older solutions in favor of LEO.

Griffin said airlines will likely need to see concrete developments on the terminal and network side, likely within the next year, before signing a major deal with a LEO provider.

“There is no lack of interest and positive attention about this. But I’ve been around a bit in this space and people want to see real things, not to sign up for things that may not happen,” Griffin said. “I don’t think it’s going to come prematurely, especially in the current global climate.”

The LEO players also provided updates about their status with user terminals, a key piece to get airlines onboard with the service.

OneWeb has selected Israeli company Satixfy to build a terminal that will work with both LEO and GEO satellites. Griffin reiterated that OneWeb is working closely with antenna providers on inexpensive terminals, which will be rolled out “relatively soon.”

SpaceX is sticking with its vertical integration approach of designing its own hardware, and Hofeller said SpaceX is leveraging its phased array consumer antenna for aviation. He pointed to the value of vertical integration that it allows SpaceX to iterate and optimize the design for the end user, as well as control cost.

Telesat has not announced an antenna partner for the aviation market. Vinnakota said Telesat is working with products that are already on the market today, and “anyone and everyone” — including Electronically Steered Array (ESA) designers. He said specifically that Lightspeed is testing with existing products like gimbal antennas and ThinKom aviation antennas.

“[Telesat will] start off with the existing products, so people can switch easily, then electronic antennas as they come to market,” Vinnakota said. “We want to be as open architecture as possible and allow multiple hardware options.”