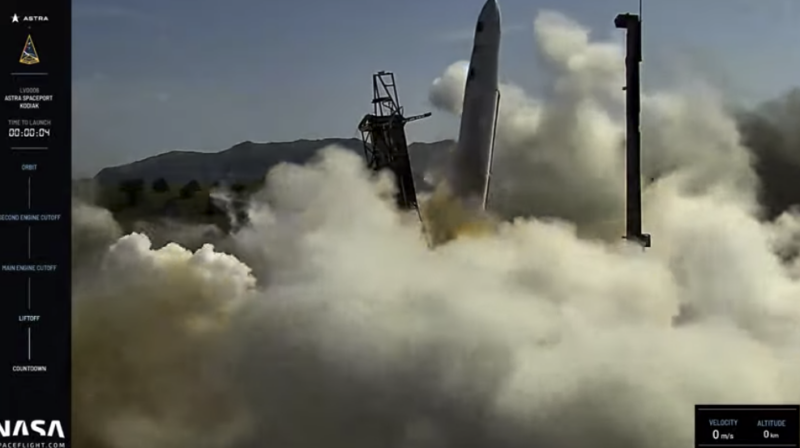 Astra’s launch with Launch Vehicle 0006 on Aug. 28. Screenshot via NASASpaceflight/Youtube

Shares in Astra Space dropped sharply from $11.68 per-share at closing on Friday to $8.90 on Monday’s opening after the launch company experienced a launch failure over the weekend that resulted in the loss of a U.S. Space Force test payload.

Astra attempted to launch the 45-feet high Vehicle 0006 at its spaceport in Kodiak, Alaska. The company aborted an attempt on Friday, shutting down engines just before launch. During Saturday’s mission, which was livestreamed by NASASpaceflight, one of Astra’s five main engines shut down just after liftoff. The vehicle moved to the side off the launch pad, and then took off slowly.

The company said after approximately two minutes and thirty seconds of flight, the range issued an all engine-shutdown command, ending the flight. The vehicle reached an altitude of approximately 50 km before returning to Earth.

This launch was conducted as part of Space Force’s Space Test Program (STP-27AD1). It carried a test payload that was not set to be deployed. Astra has opened a mishap investigation with the Federal Aviation Administration (FAA) for the launch.

“We regret that we were unable to accomplish all mission objectives for the U.S. Space Force; however, we captured a tremendous amount of data from this test flight,” commented Chris Kemp, founder, chairman and CEO of Astra. “We will incorporate learnings from this test into future launch vehicles, including LV0007, which is currently in production.”

This was Astra’s third orbital launch attempt and it has yet to reach orbit. A previous launch attempt reached space, but was just under orbital velocity.

The failure is a public setback for the company as it’s first launch after going public in July. Astra went through a special purpose acquisition company (SPAC) merger with Holicity, Inc. that added $464 million to the company’s balance sheet.

“Reviewing flight data and video, two things are very clear — An engine shut down right after launch. Everything that happened next made me incredibly proud of our team. Space may be hard, but like this rocket, we are not giving up,” Kemp tweeted after the launch.