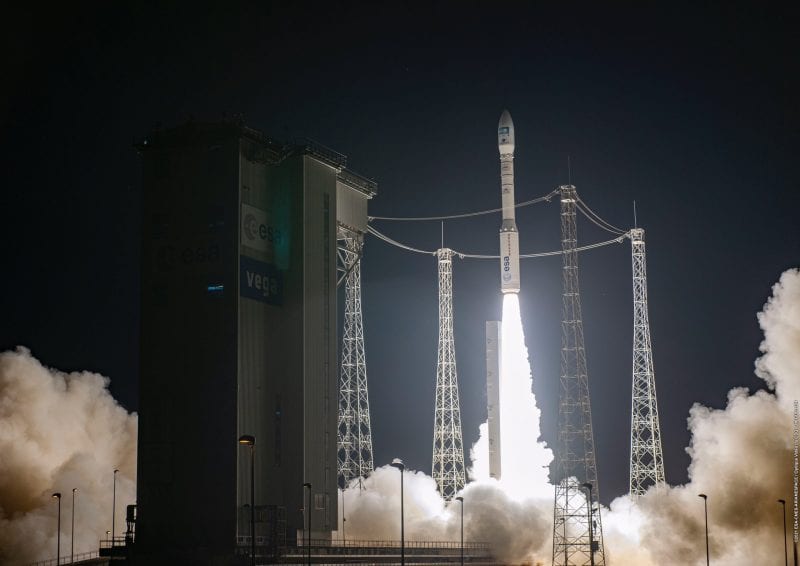 Arianespace’s Vega rocket returned to flight on Wednesday evening, launching a next-generation Earth Observation (EO) Pléiades Neo satellite for Airbus, along with five rideshare small satellites. The launch from French Guiana was the second Arianespace launch in less than 72 hours, after Arianespace launched a batch of OneWeb satellites from the Vostochny Cosmodrome in Russia on April 25.

The light lift Vega vehicle took off from the Guiana Space Center in French Guiana at 10:50 p.m. local time on April 28. Airbus confirmed after the launch that the first telemetry signals were received from Pléiades Neo.

This was the first Vega mission after the VV17 mission failure in November 2020. Avio, industrial prime contractor for the Vega launcher, prepped for the mission under the direction of Arianespace and ESA, following the recommendations issued by the independent inquiry commission for the VV17 mission.

“I would like to congratulate everybody involved at Arianespace, ESA and Avio for successfully returning Vega to flight,” said Stéphane Israël, Arianespace CEO. “I am especially proud of our teams who were able to carry out two launches, on two different continents, in less than 72 hours – kudos!”

The Pléiades Neo satellite is the first of a constellation of four satellites built and operated by Airbus. Each satellite will add half a million square kilometers per day at 30 cm native resolution. The satellites also have inter-satellite links with SpaceDataHighway (EDRS) Geostationary (GEO) satellites to acquire imagery 30 to 40 minutes after a tasking request.The next satellite, Pléiades Neo 4, is already in Kourou set to launch this summer.

The launch also carried an EO microsatellite for the Norwegian Space Agency, Norsat-3, and four cubesats, for operators Eutelsat, NanoAvionics/Aurora Insight and Spire.

For Eutelsat, it was the first nanosatellite in its ELO fleet, which stands for Eutelsat LEO for Objects. This satellite is the first of a planned constellation of 25 to offer global Internet of Things (IoT) coverage. The satellite was built by Tyvak.

For Aurora Insight, its satellite dubbed BRAVO will join twin satellite CHARLIE in orbit. These satellites will measure RF spectrum from space.