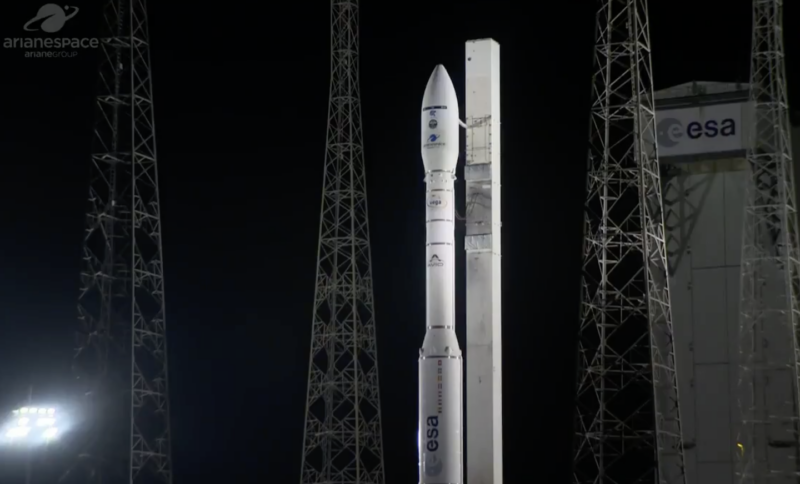 The Arianespace Vega rocket on the pad just before the VV17 mission. The mission failed. Screenshot via Arianespace.

The Arianespace Vega mission VV17 on Monday night failed. The Vega rocket took off from the Guiana Space Center (GSC) in French Guiana on Monday at 8:52 p.m. ET. But eight minutes after liftoff, “following the first ignition of the engine of the Avum upper stage, a deviation of trajectory was identified, entailing the loss of the mission,” Arianespace said in a press release.

It was carrying SEOSAT-Ingenio for Spain’s Center for Development of Industrial Technology (CDTI), and TARANIS for CNES, the French space agency.

Telemetry data analyses are in progress to determine the cause of the failure. The launch provider plans to hold a press conference on Tuesday, Nov. 17.

This is the second Vega failure after the July 2019 failure that lost a satellite for the United Arab Emirates. This was Arianespace’s seventh launch of the year and the 17th Vega launch.

The primary payload SEOSAT-Ingenio is first Spanish Earth Observation (EO) satellite. It was built by Airbus Defence and Space. TARANIS is a microsatellite built by CNES and designed to observe upper-atmospheric lightning events, known as transient luminous events (TLEs).