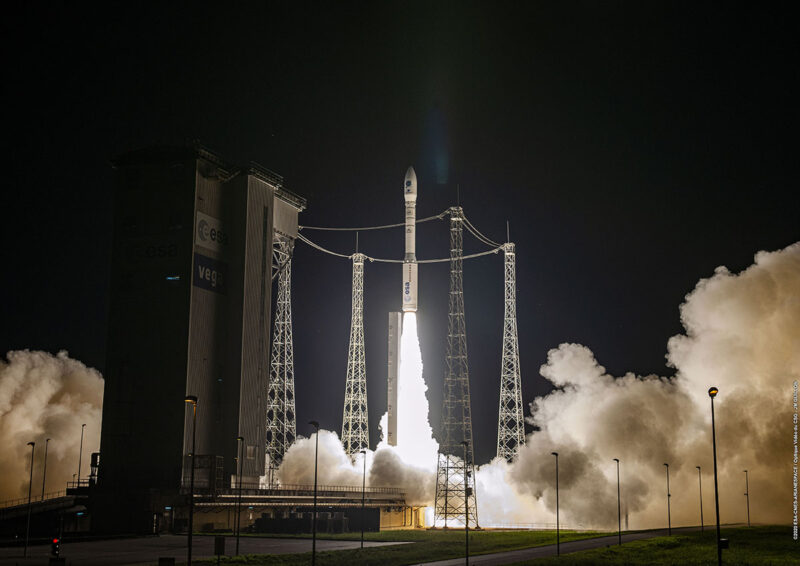 An Arianespace Vega rocket lifted 53 satellites to orbit Wednesday evening, marking the first occasion of the launcher’s new service to address the small satellite market. The Vega rocket took off from the Guiana Space Center (CSJ) in French Guiana on Wednesday at 9:51 p.m. EST. Vega was set to deliver the small satellites during a flight sequence lasting one hour and 44 minutes from liftoff to final separation.

This mission, dubbed VV16, Small Spacecraft Mission Service (SSMS) Proof of Concept (PoC) flight was originally scheduled for late March, but was delayed by the COVID-19 pandemic. Arianespace suspended operations at CSG on March 16. It was set to be Arianespace’s return to flight, but was delayed from a late July launch date. Instead, Arianespace launched three spacecraft for Intelsat, SpaceLogistics LLC, and B-SAT on an Ariane 5 on Aug. 15 for its first mission after the spaceport closed. It was also delayed this week due to the storm track of Typhoon Maysak affecting the Jeju ground station on the South Korean island.

Luce Fabreguettes, Arianespace’s executive vice president of Missions, Operations and Purchasing, told Via Satellite earlier this year that this rideshare mission was a new milestone for the French launcher.

“We’ve adapted to reflect new realities in the marketplace, creating a rideshare option for the burgeoning smallsat economy. Throughout our history as the world’s first commercial launch services company, we’ve been able to create new products that have been able to help our customers themselves innovate to the fullest. We will keep going in this fashion,” Fabreguettes said.

Arianespace developed the concept for this launch with the support of the European Space Agency (ESA) and Avio. The satellite dispenser is an ESA product developed by Avio under ESA leadership and it is produced by the Czech company, SAB Aerospace. Satellite integration was performed for the first time in Europe, in the Czech Republic. In addition, the European Union contributed to financing this flight.