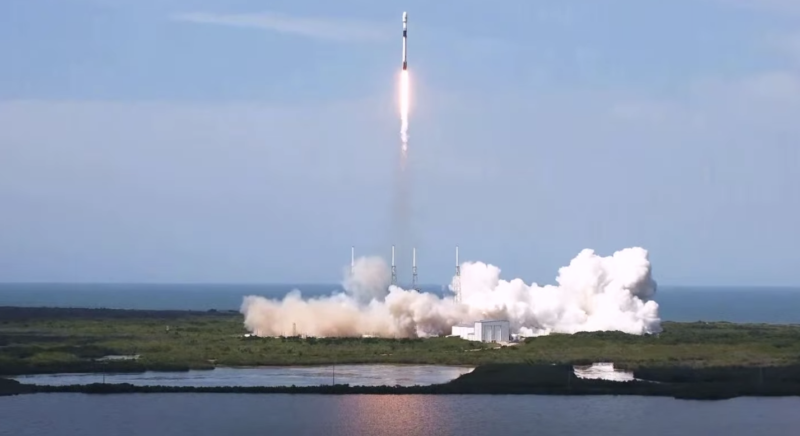 The launch marked the second time a Falcon 9 carried a GPS III satellite into space; SpaceX served as the provider for the first satellite’s launch in December 2018, while the second satellite was launched on a United Launch Alliance (ULA) Delta V rocket in August 2019.

The Falcon 9 first stage booster successfully landed on SpaceX’s droneship “Just Read the Instructions,” about 8 minutes and 30 seconds after liftoff.  This was the first national security space launch where SpaceX attempted to recover the booster post-launch.

Walter Lauderdale, mission director for the Space and Missile Systems Center’s Launch Enterprise said in a June 26 media teleconference that the Space Force agreed to give SpaceX the opportunity to recover the booster during this mission in exchange for some revised spacecraft requirements. “Given our technical insight and the support from our GPS teammates, from a mission design perspective, we were able to reach an arrangement in the best interest of the government,” he said.

The launch took place after a two-month delay from its originally scheduled date  in order to implement new health and safety measures to protect launch and operations crew during the ongoing COVID-19 pandemic.

“The GPS III program brings a new standard of excellence for the entire space community. Our production team and contract partners have developed an indispensable tool that is available to military and civil users around the world.” said Cordell DeLaPena, program executive officer for SMC’s Space Production Corps. “Our team will continue to advance the launch campaign for the remaining space vehicles and I anticipate the successful launch of SV03 on the Falcon 9.”

The satellite was built by Lockheed Martin, and the company is continuing production on the rest of the GPS III satellites. Space Vehicles 4 and 5 are complete and have been declared available for launch by the Space Force, while SV-06, SV-07 and SV-08 are completely assembled on the production floor and are currently going through post assembly and environmental testing, said Tonya Ladwig, acting vice president of Navigation Systems Division, Lockheed Martin Space. SV-09 and SV-10 are currently in component build-up, she added.