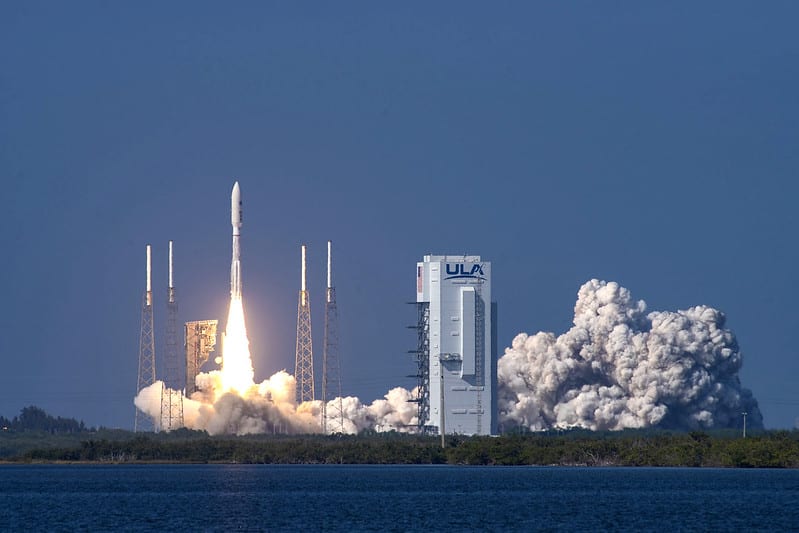 The sixth AEHF satellite, built by Lockheed Martin, was launched on a United Launch Alliance on an Atlas V rocket on March 26. Photo: Lockheed Martin

Since the Thursday launch, the AEHF-6 satellite has separated from its ULA Atlas V rocket and is now flying under command from ground control, a Lockheed Martin representative said.

The AEHF satellite, built by Lockheed Martin, was launched on a ULA Atlas V rocket. ULA is a joint launch venture between Boeing and Lockheed Martin.

The system was the first satellite to be delivered to Cape Canaveral Air Force Station, Florida, since the U.S. Space Force was formally established last December. It was delivered Jan. 13 from Lockheed’s facilities in Sunnyvale, California, to the Cape aboard an Air Force C-5M transport aircraft.

Initial launch countdown was halted at T-minus 46 seconds due to a ground hydraulics actuator fault, according to ULA.

“Bad amplifier card on a ground system hydraulic pump controller. Working on a solution,” ULA CEO Tory Bruno said in a tweet on Thursday. A solution was reached and the space vehicle successfully launched less than one hour later.

The 45th Space Wing at the Cape integrated a multi-manifest space vehicle called TDO-2 on the Centaur’s upper stage. TDO-2 is a new space situational awareness satellite sponsored by the Air Force Research Laboratory. The multi-manifest rideshare is the second executed by the launch enterprise directorate, Bongiovi noted.

Thursday’s launch also marks the 500th flight for Aerojet Rocketdyne’s RL10 engine, used in the Centaur upper stage of the Atlas V rocket. It was the 138th launch for ULA since the alliance was formed in 2006, Gary Wentz, ULA vice president for government and commercial programs said in the Tuesday media call.

The launch was not open to public viewing, as Space Force officials took extra precautions to safeguard personnel as the novel COVID-19 coronavirus pandemic spreads across the globe. The Space Force teams at the 45th Space Wing in Florida and at SMC in California limited themselves to mission essential personnel, said Brig. Gen. Doug Schiess, 45th Space Wing Commander on the Tuesday media call.

“We’re not having public launch viewing for this mission,” he said, noting that media would be exempt from that restriction. “That right there helps us with the number of defenders that we need to have out and about” on site. That determination will be performed on a case-by-case basis and as the Space Wing responds to new COVID-19 directions from the Defense Department, he added. “We’re saying [no public viewing] for this mission specifically, and then we’ll readdress for the next mission,” he said.