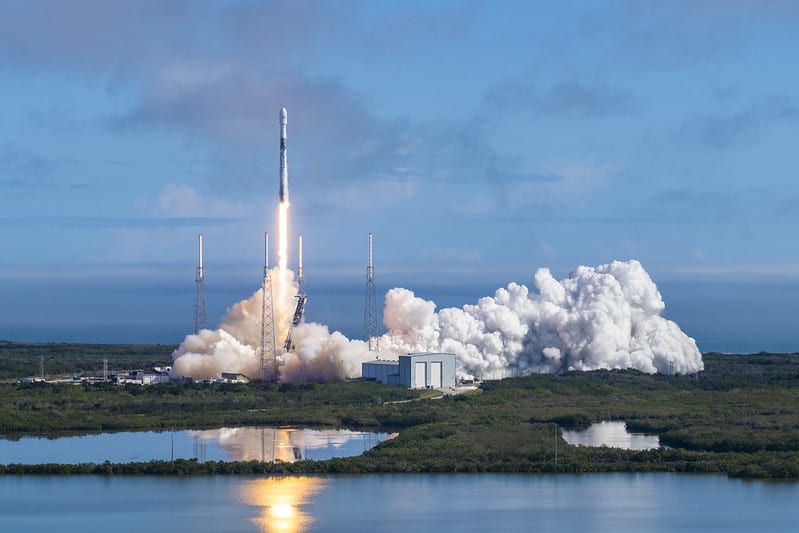 SpaceX launched its fifth batch of Starlink satellites on a Falcon 9 on Sunday, but did not complete the booster landing, which would have been its 50th successful landing.

SpaceX lead manufacturing engineer Jessie Anderson said it in the live broadcast that it appeared  the first stage made a soft landing on the water next to the drone ship, and may be in one piece.

“We clearly did not make the landing this time,” Starlink engineer Lauren Lyons said as she watched the empty landing pad on the droneship.

The Falcon 9 took off from Space Launch Complex 40 (SLC-40) at Cape Canaveral Air Force Station in Florida, on Monday at 10:05 a.m. EST. The satellites were deployed about 15 minutes after liftoff. The short timeline was because the satellites were injected directly into elliptical orbit versus a circular orbit, a method SpaceX plans to use moving forward. In this case, the satellites are deployed shortly after the first burn of the second stage, and then onboard ion thrusters move the satellites into their intended orbits.

“Keep in mind the stack of 60 Starlink satellites combined is one of the heaviest payloads we fly so putting them directly into this orbit requires more vehicle performance and makes recovery more challenging,” Anderson said.

It was the fourth flight for the Falcon 9 booster, which flew the JCSAT-18/Kacific1 mission on Dec. 16, marking SpaceX’s quickest booster turnaround. Anderson said SpaceX hopes to decrease that turnaround time even more, and make rocket launches similar to air travel in terms of plane servicing.

“This historic mission will forge a path to making spaceflight possible for all people who dream of it, and we are pleased to work with the Space Adventures’ team on the mission,” said SpaceX President and COO Gwynne Shotwell said.

“Creating unique and previously impossible opportunities for private citizens to experience space is why Space Adventures exists. From 2001-2009 our clients made history by flying over 36 million miles in space on eight separate missions to the ISS. Since its maiden mission in 2010, no engineering achievement has consistently impressed the industry more than the Dragon/Falcon 9 reusable system. Honoring our combined histories, this Dragon mission will be a special experience and a once in a lifetime opportunity – capable of reaching twice the altitude of any prior civilian astronaut mission or space station visitor,” said Eric Anderson, Chairman, Space Adventures.

Space Adventures President Tom Shelley will be speaking about the company’s space tourism plans at the SATELLITE 2020 conference in March.