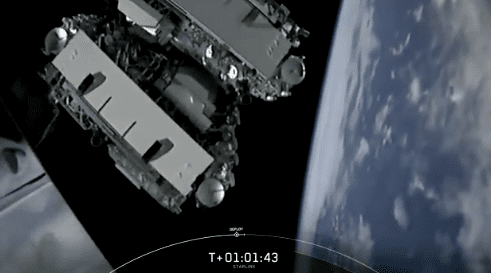 In its first launch of 2020, SpaceX launched its third set of Starlink satellites from Space Launch Complex 40 (SLC-40) at Cape Canaveral Air Force Station in Florida, on Monday at 9:19 p.m. The satellites were deployed about an hour after liftoff.

Starlink is designed to provide fast, reliable internet service to unserved and underserved areas. According to Lyons, SpaceX hopes to begin providing service in the northern U.S. and Canada this year, and nearly cover the globe after 22 more launches. Regulatory filings suggest that SpaceX is planning for a constellation of at least 42,000 satellites.

This launch marked the third time this Falcon 9 first stage booster was reused. Previously, the booster launched the Telstar 18 VANTAGE mission in September 2018, the Iridium-8 mission January 2019, and a Starlink mission in May 2019. The first stage was recovered for the fourth time on SpaceX’s drone ship “Of Course I Still Love You.” Recovery vessel Ms. Tree, however, did not catch the payload fairing half.

One satellite in this launch will test an experimental darkening treatment with the goal of reducing the light reflection on satellites, which can be an issue for astronomers, Lyons said.

“While it’s really cool to catch a glimpse of those satellites from the ground, they can sometimes be a distraction to astronomers,” she said.

In addition, on Tuesday, SpaceX’s Dragon spacecraft returned to Earth, completing its third resupply mission to the International Space Station. The spacecraft carried with it approximately 3,800 pounds of science supplies.

Also, NASA announced on Monday that it is targeting no earlier than Saturday, Jan. 18, for the Crew Dragon’s In-Flight Abort Test. The new date allows additional time for spacecraft processing. The demonstration of Crew Dragon’s in-flight launch escape system is part of the Commercial Crew Program and is one of the final major tests for the company before NASA astronauts will fly aboard the spacecraft.