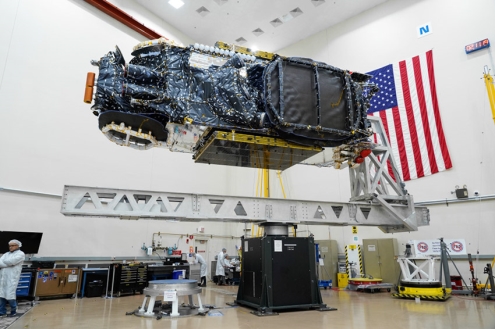 The Intelsat 39 geosynchronous communications satellite safely arrived at the Arianespace launch base in Kourou, French Guiana, after completing final delivery checkouts at Maxar’s Palo Alto, California manufacturing facility. Intelsat 39 is the 52nd satellite built by Maxar for their long-term customer, Intelsat. The Intelsat, Arianespace, and Maxar teams in Kourou will now prepare the satellite for launch on an Ariane 5 rocket, which is currently scheduled for July 24.

Once it reaches its final destination at 62 degrees East, the satellite will provide broadband and video distribution services across Africa, Europe, the Middle East, and Asia. The satellite aims to also enhance mobile connectivity for aerospace, maritime, and government users operating in the Indian Ocean region.

The satellite has both C-band and Ku-band transponders, and will use hybrid electric and chemical propulsion to reach its desired orbit, where it is designed to provide service for a minimum of 15 years. Once on-orbit, the satellite will maintain its position using all-electric propulsion, which aims to provide efficiency for satellite operators by reducing launch mass while increasing spacecraft flexibility and performance.