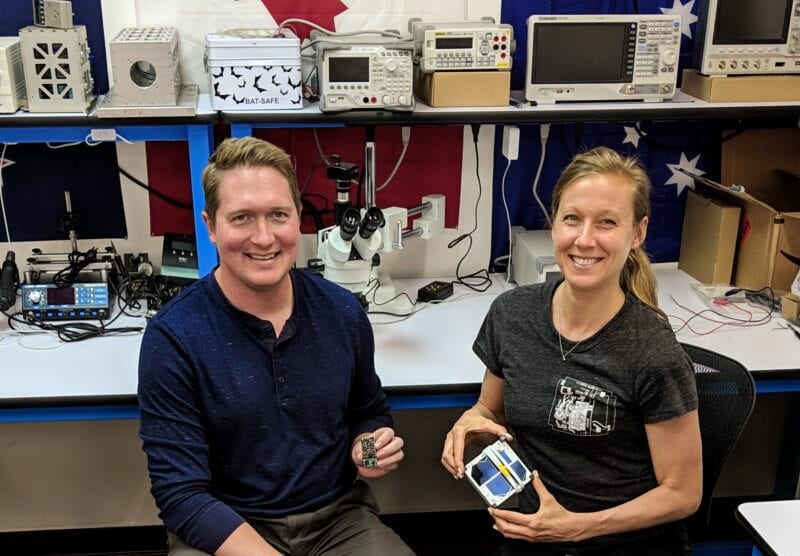 Swarm’s Internet of Things (IoT) network that connects sandwich-sized satellites to tiny, handheld hardware is now live, offering remote connectivity at the market-disrupting price of $5 per month per device.

Swarm, which was founded in 2017 and garnered media attention in 2018 for launching satellites without FCC approval, is now an operational player in the satellite IoT market. The company announced its commercial availability on Tuesday, after it launched 36 satellites on the recent SpaceX rideshare mission. The company now has 81 satellites on orbit, 72 of which are commercial.

The company is vertically integrated, and built and designed hardware, software, and protocols for its satellites and the user modem it calls the Swarm Tile. The Tile costs $119 per device and is a modem that can be embedded into any IoT device that operates in a remote location.

The Tile communicates with satellites in Low-Earth Orbit (LEO) that weigh just 400 grams. Satellites pass the data to ground stations, pulling customer data into an API where it can be easily accessed. It’s a two-way network, allowing a customer to send a command to the sensor. At this point, satellites pass over Swarm’s ground stations about every three hours. When the company has launched its full constellation of 150 satellites, it will allow data to be transmitted at any time.

Sara Spangelo, CEO and co-founder told Via Satellite the Swarm pricing model is four to 20 times cheaper than similar satellite offerings today, and Swarm can transmit customer data more often because of its large number of satellites. Spangelo said this pricing allows customers who may pay $10,000 each month to another provider to spend $500 per month with Swarm. The company’s goal with the pricing is to bring in new customers who haven’t been able to afford remote IoT connectivity before.

“For small companies that are bootstrapped, doing low-margin things like agriculture and logistics, this is an incredible benefit to their businesses — how they operate their price points, the risks they can take, the markets they can enter,” Spangelo said. “It also is at the point where people that have only previously used cell [connectivity], but want to expand their business beyond where cellular coverage is, can start to think about it as affordable.”

The company has customers from small and medium-sized businesses to Ford-owned Autonomic, which has a connected vehicle infrastructure called the Transportation Mobility Cloud. Another company SweetSense, which offers remote water and energy monitoring solutions, has a partnership with Swarm, whose pricing allows SweetSense to monitor more water supplies in Africa.

Spangelo said Swarm has the highest demand in agriculture for water monitoring applications, and logistics for tracking trucks or maritime tracking. She also reports demand in energy monitoring, environmental tracking, and government uses, but emphasizes that the service “vertical agnostic.”

“It’s not a moisture sensor or an asset tracker. It’s a modem, or a connectivity device that can be integrated or plugged into any sort of device,” Spangelo said. “We do that on purpose. We have ideas of the verticals and use cases, but we’ve been very surprised what people come around with, ones we would have never expected.”