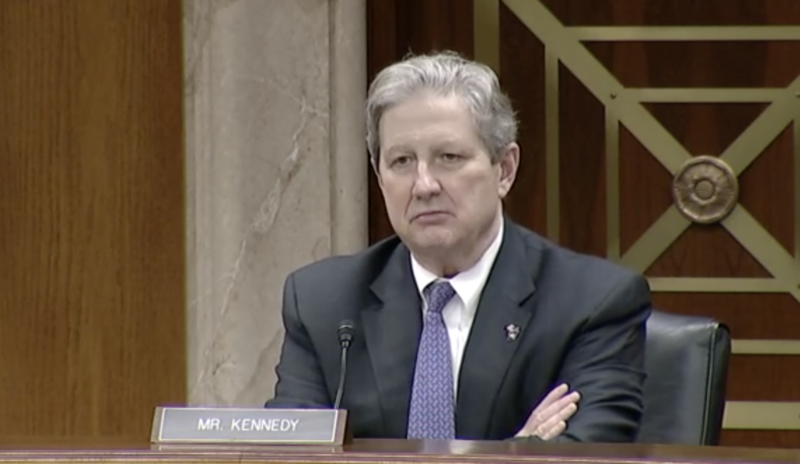 Senator John Kennedy speaks during a hearing to conduct oversight of the FCC’s Spectrum Auctions Program on June 16. Photo: Screenshot via appropriations.senate.gov

Senator John Kennedy, R-La., questioned the validity of the FCC’s accelerated relocation payments to incentivize satellite operators to clear C-band spectrum as FCC Chairman Ajit Pai testified before a subcommittee of the Senate Committee on Appropriations on Tuesday.

Sen. Kennedy pushed Pai as to why $9.7 billion in accelerated relocation payments that the FCC has set are necessary. Kennedy also called out Intelsat in a veiled reference, saying that the operator has gone into bankruptcy to leverage the FCC for more money.

Pai reiterated arguments he has made in the past that the accelerated relocation payments align the interests of the satellite operators with the public interest to deploy 5G quickly.

Pai said that litigation was not a condition to opt-in to the FCC’s accelerated timeline, and all the operators eligible to receive payments have opted in. “Although the incumbents electing these payments have not typically waived a right to litigation, they have forfeited it by agreeing to the election,” Pai said.

Kennedy said the subcommittee plans to have another hearing with the FCC’s general counsel to address that point.

“This makes no sense to me. … I’ve never heard of giving somebody $10 billion dollars to keep them from suing without them waiving their claims and causes of action,” Sen. Kennedy said.

In addition, Pai gave a wide ballpark number of “tens of billions of dollars,” as high as $35 billion net, when asked how much the public spectrum auction could yield. He said he would support Congress giving the FCC the authority or directing the spending itself to closing the digital divide. The FCC is required to put auction proceeds in the U.S. Treasury.

Kennedy also pressed Pai as to what happened in the meeting between FCC senior counsel and Intelsat CEO Stephen Spengler on Nov. 5, 2019, which is now the subject of the insider trading lawsuit, James Hill vs. Silver Lake Group LLC. The lawsuit alleges insider trading because two of Intelsat’s largest shareholders sold off shares directly after the meeting. Kennedy also said he wants a hearing with those staffers. “Something happened in that meeting,” he said.

“I am informed that the company was very keen to get a sense from the FCC as to which direction it was heading — private sale, public auction, [or] something else. The FCC staffer, as well as another staffer declined to state a position one way or the other. And that was it,” Pai said. “They did not give any forecast as to where the FCC was heading.”

Editor’s note: An earlier version of this story listed Chris Coons as a Republican. He is a Democrat.