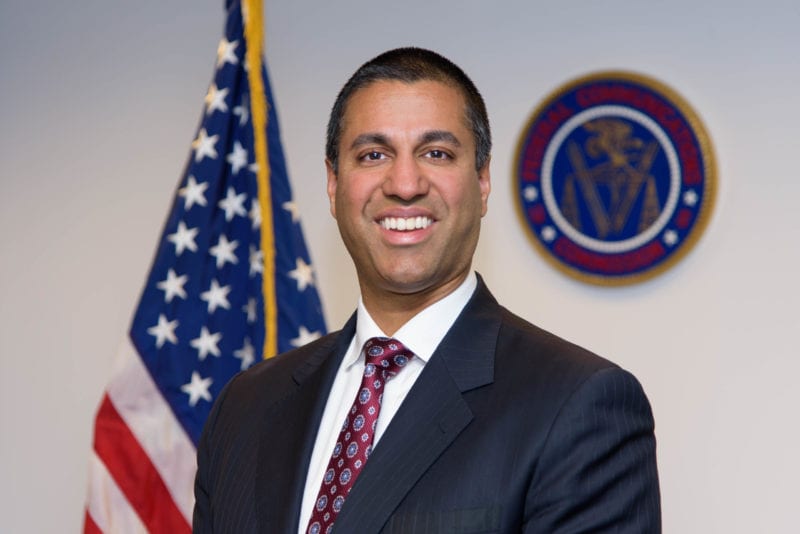 FCC Chairman Ajit Pai has proposed accelerated relocation payments for satellite operators that could total up to $9.7 billion as incentive to quickly clear part of the C-band spectrum for 5G purposes.

Those payments, Pai said, would be paid by the winning bidders of a public C-band auction, who would also reimburse operators for relocation costs, which the FCC estimates at between $3 billion to $5 billion. The Chairman previewed his draft proposal on Thursday afternoon, ahead of the full draft on Friday. He said the FCC plans to begin the C-band auction on Dec. 8.

The FCC is expected to vote on the proposal at its upcoming Feb. 28 meeting, and Commissioner Brendan Carr tweeted Thursday after Pai spoke that he would vote in favor. Commissioner O’Rielly also issued a statement Thursday that he expects to support it.

If relocation costs are reimbursed at the highest FCC estimate of $5 billion, operators would receive $14.7 billion to clear the spectrum. Pai called his amount of $9.7 billion of incentives a “Goldilocks” proposal, to encourage operators to quickly clear the spectrum, a goal that he said is in the public interest.

“It is in the public interest to make available the C-band for 5G deployment as quickly as possible, as part of the national priority to promote American leadership in 5G,” Pai said. “And to get the job done quickly, we need to align the satellite companies’ private interests with the public interest. That’s precisely what accelerated relocation payments will do.”

During an FCC press conference following the Chairman’s remarks, a senior FCC official said that $9.7 billion will be sufficient to get satellite operators on board with the accelerated relocation deadlines, and that the amount reflects a market value. The FCC did not share details Thursday about how the $9.7 billion would be allocated among the operators with licenses to the spectrum.

To those who would rather have the FCC wait for Congress to pass legislation on C-band, Pai said that would be a “boon for China and other countries eager to seize a leadership role in 5G.” He made it clear, however, that Congress has the ability to take action to direct a portion of auction proceeds to closing the digital divide with rural broadband.

The CBA tweeted Thursday that it was “pleased” with Chairman Pai’s statement. The alliance also issued a statement: “The imminent issuance of the draft order reflects the tireless efforts of many over the past several years to ensure that this critical spectrum comes to market safely, quickly, and efficiently. Today’s comments by Chairman Pai are a significant development in this important proceeding. We look forward to reviewing the draft order, once issued, to place Chairman Pai’s comments in full context.”

A day before Pai’s announcement, Bloomberg Law reported that Intelsat had reportedly hired law firm Kirkland & Ellis to consider a possible Chapter 11 bankruptcy if U.S. regulators did not increase the company’s compensation for C-band spectrum. Intelsat told Via Satellite that it would not comment on rumor, and Kirkland & Ellis did not respond to a request to comment.

Attorney Owen Kurtin of Kurtin PLLC said that Kirkland & Ellis is a leading law firm for bankruptcy debtors, and filing for Chapter 11 now may be a “very strategic” move on Intelsat’s part. Intelsat’s capital structure and debt, he said, means that even with a viable business, it is difficult for the company to be profitable, and many have expected Intelsat to file for Chapter 11 bankruptcy to reorganize for years — but filing at this point could affect the C-band auction.

“The court will stay any action by creditors on Intelsat’s assets, and the stay might last for a couple of years while the bankruptcy plan is being negotiated,” Kurtin said of what would happen if Intelsat filed for Chapter 11 to reorganize. “The effect [of] that would be to prevent the FCC from auctioning off Intelsat’s C-band spectrum. … The FCC would be completely stopped, frozen, in its plan to auction off Intelsat’s part of the C-band spectrum.”

Kurtin said he thinks Intelsat may have a “very good argument” to say that although spectrum is a public good, it is a key asset to its business and therefore should be subject to a stay. He also hypothesized that a Chapter 11 filing could even hold up the entire auction if the FCC decides against auctioning off the other operators’ spectrum while Intelsat is tied up in court.

Kurtin pointed to the 2003 case FCC v. NextWave Personal Communications, in which the U.S. Supreme Court held that under section 525(a) of the U.S. Bankruptcy Code (11 U.S.C.), the FCC could not revoke the spectrum license of a bankrupt licensee of that spectrum just for failure to make timely payments of the license fees. “The licensed spectrum was an asset of the bankrupt licensee that the FCC could not just take away by itself without the disposition of the Bankruptcy Court,” he said.

For now, it appears that the FCC is trying to avoid legal action. Thursday morning, ahead of Chariman Pai’s remarks, Commissioner Carr tweeted, “Never assume your toddler wants their waffle cut the same way today as yesterday. A lot can change in 24 hours.”