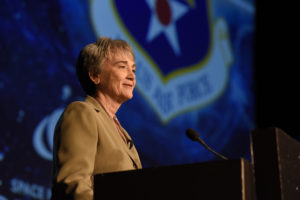 U.S. Air Force officials provided some insight into the concept of space deterrence at the 35th annual Space Symposium , as Pentagon leaders have ramped up rhetoric about the need to combat peer adversaries in the space domain.

Outgoing Air Force Secretary Heather Wilson told reporters April 10 that “there may come a point where we demonstrate some capabilities so that our adversaries understand that they will not be able to deny us the use of space without consequences.”

She did not elaborate on what those capabilities or demonstrations may be, but noted the Air Force evaluated its future space strategy and capabilities in a recent 90-day study, and performed about 25 tabletop exercises “explaining what we were trying to do and why.”

Adversaries “need to know that there are certain things we can do, at least at some broad level” to be deterred, she said.

In his keynote speech Tuesday, Air Force Chief of Staff Gen. David Goldfein said the service must be equipped to protect and defend the space assets it already has. At the same time, “you don’t just go into the rings and take punches all day,” he added. “At some point, you do have to punch back.”

Wilson added during the media roundtable that the final element of deterrence is uncertainty. “How confident are [adversaries] that they know everything that we can do?” she said. “What we want is, at any moment of crisis, that they decide that the better thing to do is to live to fight another day, and to deescalate rather than fight another day.”

The emergence of responsive launch capabilities could prove to deter adversaries as they will be hard-pressed to plan ahead. Air Force Assistant Secretary for Acquisition, Technology and Logistics Will Roper called responsive launch “pretty disruptive,” in a small media roundtable Wednesday.

Speaking from the purview of his former role as the leader of the Pentagon’s Strategic Capabilities Office, Roper noted that opponents will require global space situational awareness to detect a rapid satellite launch, which will be an expensive undertaking.

“That then represents a potential vulnerability for us to exploit,” he said. “So we effectively turned low Earth orbit into a time-critical challenge, and we know that time-critical targeting is hard – we have been working on it for decades.”

“If you take the long view and your country is interested in participating in manned spaceflight, then you should not be contributing in any way, shape or form to creating risk to manned spaceflight,” he said. “So demonstrating any capability that would create more debris, in my mind, is a step in the wrong direction.”

Goldfein lauded the allies and partnerships the U.S. military has developed as an asymmetric advantage that would also contribute to space deterrence. “Potential adversaries will pay more attention to what the international community – banding together with common interests – is saying, than they will in a unilateral discussion.”

It is just as important for the Pentagon and its allies to showcase international capability in space as it is to demonstrate U.S. capability, he noted.

Having trained space warfighters is also critical to deterrence in the domain, Goldfein said. “We can build all the technology in the world, but it means little if you don’t have the trained and ready force to operate it,” he said.